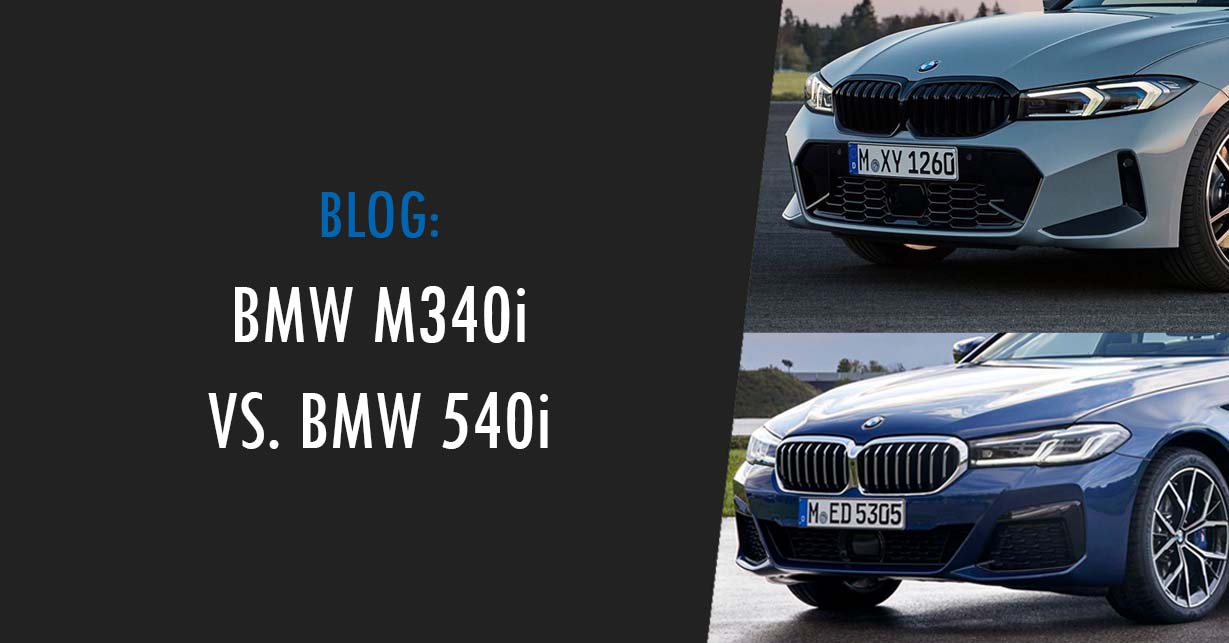 The M340i is designed for those who want M3 performance levels but aren’t willing to compromise on comfort and price to such an extent. On the other hand, the BMW 540i is an executive full-size sedan. It would be exactly what you want if you are after a competent, yet docile family sedan that still offers a decent punch.

How does the G20 M340i compare to the G30 540i in terms of acceleration, handling, transmission, options, look, and sound? Here is the full comparison between these two desirable BMW sedans.

The xDrive M340i does 0-60mph in 3.8 seconds while the xDrive 540i reaches 60mph from a standstill in 4.4 seconds. RWD models are comparably slower with both models which is to be expected since they can’t put the power down quite as well as xDrive models can. The difference in torque is more noticeable than the difference in horsepower which is why the M340i is stronger at the low end.

The B58 is a reliable engine well-receptive to tuning. A power increase can be quite substantial for both cars; a tune and a downpipe can result in gains of up to ~80 horsepower without compromising reliability. The M340i will always be the better-performing car due to its more potent engine tuning from the factory, reduced weight, and sports-oriented suspension.

Both cars are only available with automatic transmissions

Transmission options are the same between both, only being available with the excellent ZF 8-speed automatic. The M340i does have a more aggressive tune which makes it shift slightly quicker in Sport+ mode. It should also be noted that the xDrive systems differ slightly. The xDrive M340i will let you send full power to the rear wheels with just the touch of a button; this isn’t possible with the xDrive 540i.

In terms of exhaust sound, BMW equipped the M340i with a less restrictive exhaust system, which is why it sounds better despite having the same engine. The added sound deadening in the G30 540i also makes it difficult to hear any exhaust sound.

If you’re looking for a 5 Series that can match and even outperform the M340i, we recommend you opt for an M550i instead.

The M340i is more agile thanks to proper adaptive M suspension with electronically controlled dampers which come included with the M340i. The 540i is comparably softer and feels heavier and less agile when behind the wheel. The 540i is designed to be comfortable first and it isn’t nearly as driver-focused as the M340i. The M340i also sports a limited-slip differential while the 540i has an open differential.

You can get the 540i with the optional adaptive M suspension which tries to make the 540i both dynamic and soft at just a push of a button. Even though this system is incredibly capable, the 540i can’t match the M340i in terms of handling.

If you want more space, less cabin noise, and a more comfortable ride, the BMW 540i is for you. The 540i comes with larger seats that offer much more comfort. Head pillows and extensive lumbar support are bound to make your long-distance journeys much more pleasing. The M340i is also a comfortable car, but the 5-Series is simply in another league.

The 540i gets features such as gesture control, ventilated, and massaged front seats, and a rear-seat infotainment package, all of which are unavailable for the M340i. The entire experience is simply more polished and interior amenities are not only available to the driver but also to the rear seat passengers.

The M340i is also really well-equipped, but it falls short of the 540i both design-wise and equipment-wise. The M340i G20 LCI takes this to another level as it adds even more advanced digital screens with upgrades all over the interior.

Even with plenty of interior aftermarket upgrades, the G20 3 Series interior will never be as refined as the interior of the G30 5 Series. The 540i has a much better interior with plenty of tech and comfort features, it wins by a mile in this category.

When it comes to day-to-day practicality, the 540i is the clear winner. The reason is that the 540i is a full-size family sedan while the M340i is a sports sedan. The 540i is considerably larger in every dimension which also translates to added trunk space. You get 18.7 cubic feet of trunk space with the 540i while the M340i gets 17 cubic feet. The 540i also gets a larger trunk opening which makes it easier to fill it up.

We also need to mention that the 540i gets an 18-gallon fuel tank while the M340i gets a comparably smaller 15.6-gallon fuel tank. The 540i can go for longer without needing to stop for fuel.

Overall, the 540i is the more practical car for a long journey. Its extra space, comfort, and larger fuel tank make it a really well-rounded comfortable sedan.

BMW is a brand known for making sophisticated-looking, yet purposeful sedans that do tend to stand out in the corporate car park. The M340i gets special M-Division touches that elevate it above standard BMW levels and make stand out. Due to its larger wheels, brakes, exhaust pipes, and M-Sport front and rear bumpers, the M340i is the better-looking car here.

The BMW M340i looks sporty, the 540i looks refined

On the other hand, the BMW 540i is more subdued, more elegant, and more “under the radar“ which is great if you’re looking for a commuter that blends in well with traffic. The LCI 540i looks incredible with the new headlight and new tail light design. The 540i can also be had with an optional BMW M-Sport exterior package which does look more aggressive, but an M-Sport M340i still looks better.

The BMW M340i offers a better value for money

It’s safe to say that both the M340i and the 540i are impressive pieces of precision Bavarian engineering. They are both powered by the B58 but the characters of each one are very different. If you’re looking for the ultimate driving experience, you will prefer the M340i over the 540i any day of the week.

On the other hand, the 540i offers a more thorough, more grown-up experience as it is more comfortable, larger, better equipped, and more luxurious. Which one do you prefer?