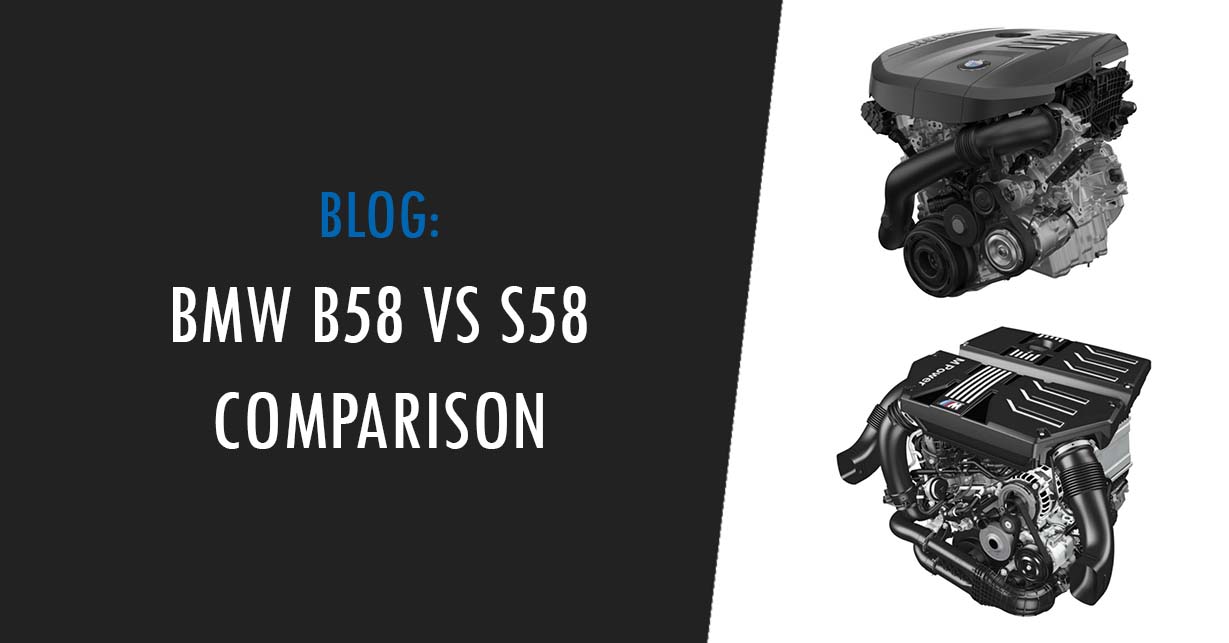 BMW has once again proven that it can make impressive turbocharged inline-6 engines. The B58 engine was introduced in 2015, and it has shown that it’s a very capable engine with lots of tuning potential. It features a new air-to-liquid intercooler, a slightly bigger turbo than its predecessor, and a closed-deck design.

The S58 engine was recently introduced as the successor of the S55, a true performance-oriented engine for BMW M-series cars. The S58 is the high-performance version of the B58, but they differ significantly. The main difference lies in the S58’s twin-turbo setup, lower compression ratio, and forged pistons, which means it can be a more capable engine.

Both engines are highly tunable with the potential to significantly increase their power output with a few bolt-ons and a tune. Both have a relatively even power band with minimal turbo lag. The B58 and the S58 are the most recent iterations of the BMW turbo I6, how do they stack against each other?

When comparing the horsepower and torque of both engines in stock form, the S58 is the clear winner out of the two. With 473 hp (503 hp in Competition models) and 443 lb⋅ft of torque, it outputs significantly more power than even the higher output version of the B58, which comes in at 382 hp & 369 lb⋅ft of torque.

The S58 outputs more horsepower & torque than the B58

BMW has done an impressive job at making the S58 output a tremendous amount of torque at low RPMs, the throttle response and low-end torque of this engine feel like that of an engine with a much higher displacement.

The twin-turbo setup of the S58 further helps with power output in the low and mid-range and reduces any hint of turbo lag. A high redline of 7,500 RPM also gives the S58 an advantage on the top end of the RPM range, although torque starts to die down above 7,000 RPM.

For daily driving, the B58 already has plenty of power

The B58 is an engine with excellent low-end torque and little turbo lag. It’s nothing to scoff at; its stock performance and power figures are above what BMW rates it at; it’s an M-performance engine just a step below a true M-engine. A B58-powered car has more than enough power than you will ever need for the street. However, the B58 is a single-turbo engine, and its tamed-down factory tuning makes it noticeably less powerful throughout the RPM range than the twin-turbo S58.

Overall, both the B58 and the S58 have outstanding performance and enjoy linear powerbands with little turbo lag, and you can’t go wrong with either one. However, if you’re looking for an engine with a ludicrous amount of stock horsepower and torque, the S58 is the clear winner.

The B58 is one of the best modern platforms for tuning and will give tuners an unmatched bang for buck for those seeking reliable power. With a simple tune and a catless downpipe, a B58 can gain up to 80 wtq, an incredible feat. Other mods for the B58 include upgraded turbos, port injection, upgraded LPFP, upgraded HPFP, free-flowing exhaust, intake, E85, and improved cooling, among many others.

It is possible to go beyond 800 whp on the B58, but that would need a fully built engine, and a built transmission, not to mention additional supporting mods and skilled technicians and mechanics. At this point, it might be more cost-effective to get an S58-powered car.

The S58 has greater tuning potential than the B58

On the other hand, the S58 is still a relatively new engine, and its full potential is still unknown. Based on its predecessor, we can say that it will be even better for tuning than the B58. With similar mods, you can expect an even greater power increase on the S58, and its upper limit with stock internals will also be higher due to its stronger engine block. With a simple catless downpipe and a tune, the S58 can already reach ~650 whp. With upgraded turbos, 1000 whp is within reach.

The S58 has an inherent reliability advantage for track use due to a beefier cooling system, forged pistons, and a more robust oiling system that can keep oil pressure high even in high-G turns.

Overall, the S58 is better for tuning if you want to get the maximum power out of the engine. The B58 is still a much better value as plenty of mods in the market come at a lower cost, and its tuning potential is excellent.

The B58 is one of the best-sounding inline-6 engines. Its single turbo setup helps to get the engine noise out, and paired with the right exhaust, it can be loud but refined and put a smile on your face every time you smash the throttle.

The B58 sounds better than the S58

The S58 sounds a bit more muffled due to its twin-turbo setup restricting some of the noise you’ll hear, although it’s an improvement from the S55. In stock form, or even with a catless downpipe, most people would agree that the B58 sounds better than the S58.

Yes, it’s a shame that an M-engine can sound so subdued compared to a “regular” BMW engine like the B58, but the twin-turbo setup of the S58 comes at the cost of reduced engine noise coming out of the exhaust.

B58 vs. S58 Reliability: are these engines reliable?

BMW has significantly improved reliability in its turbocharged inline-6 engines iteration after iteration. The B58 has proven to be the most reliable modern BMW engine, perhaps as reliable as the naturally-aspirated N52. Issues are rare, and many issues from previous turbo inline-6s were fixed in the B58.

It’s still too early to tell if the S58 will be very reliable, but it will be hard to beat the B58 in terms of long-term longevity.

You can’t go wrong with either of these engines in terms of reliability. The B58 is a stout block that can withstand aggressive tuning and abuse, and there are already B58s with 200K+ miles with little to no issues.

The S58 is a more powerful engine with more complexity and points of failure, but it also is a strong engine block with forged internals, and its predecessor has proven to be reliable. There are many reasons to believe the S58 will be reliable, but only time will tell.

The BMW B58 has quickly gained a reputation as one of the best tuner engines ever made. It’s becoming a very attractive powerplant for those looking for a budget build that reacts to modifications well while maintaining its reliability.

On the other hand, the new S58 powering the new M cars is already a torque monster in stock form, and its true tuning potential has yet to be seen.

The B58 and the new S58 are impressive engines and show that the Bavarian manufacturer is still committed to developing and refining the inline 6. Both will go down in history as some of the best turbocharged inline-6 engines. You can’t go wrong with either if you decide to acquire a performance-oriented BMW. Let’s hope they keep developing and making the inline 6 for a long time.

Do you prefer the B58 or the S58? If you have any suggestions, contact us here.