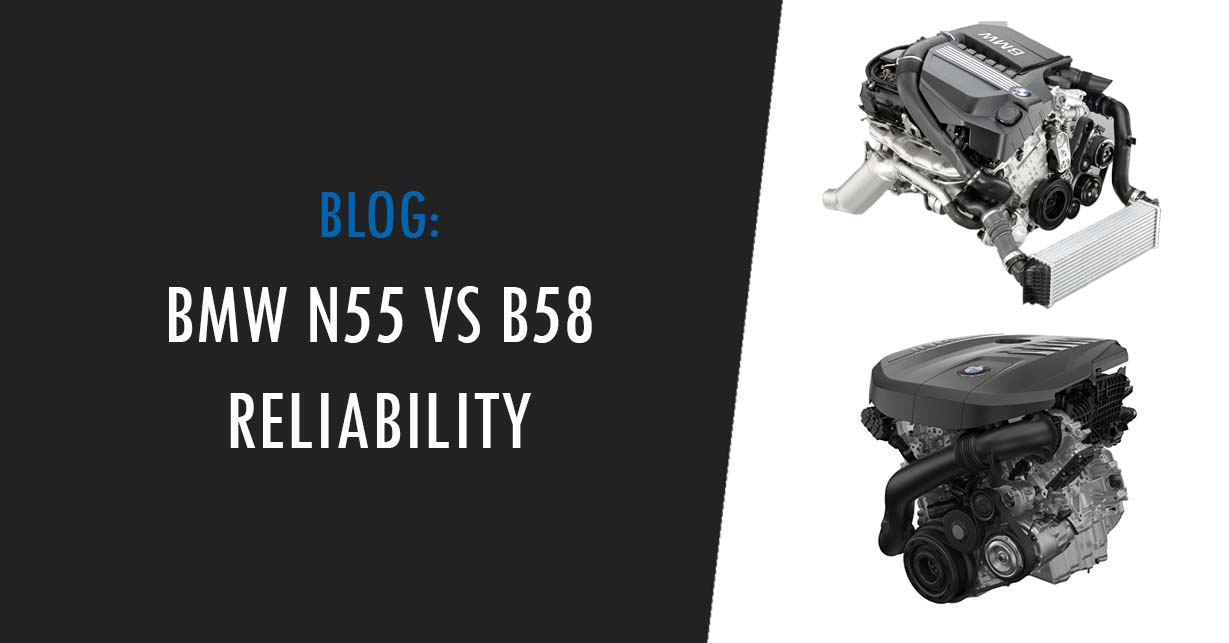 The N55 was replaced in 2016 by the B58. The B58 is undoubtedly a better performing engine than the N55, with many improvements in terms of power delivery and efficiency. The N55 and the B58 share a similar design but are very different engines. Which engine is more reliable, the N55 or the B58?

The B58 is more reliable than the N55. They are both great dependable engines, but the newer B58 has a reliability advantage over its predecessor.

Let’s look at both engines in detail to find out why the N55 is not as reliable as the new B58.

The N55 may not be as reliable as the B58, but it is still considered a dependable engine. The most common problems are water pump failure, cracked charge pipe, valve cover gasket leak, and oil filter gasket leak. Usually, owners don’t report major issue. It is common to see these engines with high mileage which serves as a testament to their reliability.

Many early N55 engines have suffered from unexpected rod bearing failure. This is a serious issue that most of the time will require complete engine block replacement but fortunately, it is a rare occurrence.

The B58 is not showing the same flaws seen in the early years of the N55. It does not have signs of issues with any of its internal components. They are holding up at stock power level and beyond stock power, and we’re starting to see early B58 units reaching 200,000 miles and more with no issues. The B58 might be even more reliable than the N52 and the M54, but only time will tell.

Why is the B58 more reliable?

Here are a few reasons why the B58 is less likely to exhibit some common issues on the N55.

N55 vs. B58 Similarities and Differences

The N55 and B58 are similarly designed 3.0 inline-6 single turbo engines. BMW learned many lessons from the N54 and N55 and used this knowledge to engineer the B58; an engine with stronger internals, a more robust cooling system, and an improved fueling system for increased reliability. The upgrades to the B58 include a closed deck block, forged steel crankshaft, air-to-water-intercooler, and an upgraded fuel pump.

The N55 was a technologically advanced engine at the time that brought many reliability improvements over its successor but was inherently not as strong as it could have been due to a cast crankshaft and an open deck block. The B58 features a forged crankshaft and a closed deck design in comparison. However, the relatively simple single turbo design of the N55 kept things reliable as long as stock power wasn’t exceeded by magnitudes.

The N55 has proven to be a reliable engine but is edged out by the B58. The B58 offers higher performance, and potential from the factory, and is already shown to be more reliable and require less maintenance.

There are a few notorious issues in the N55. Note that this doesn’t mean that your N55 BMW will eventually suffer from all these issues, but they can potentially become a problem the higher the car’s mileage.

Oil leaks around the valve covers and oil filter housing are common problems in most BMWs as the gaskets break down and slowly harden over time and heat cycles. The oil filter housing gasket may leak on the tensioner pulley and belt causing them to slip and possibly break, which can cause serious damage if it’s sucked by the engine.

Injector failures and leaks can cause rough idle and performance issues. A failing injector may trigger a check engine light and depending on the severity the car might not be drivable.

Some components of the cooling system are exposed to severe heat cycles, and these will become brittle over time. This applies to coolant hoses and coolant connecting flanges. It is recommended to check regularly your cooling hoses to avoid leaks and failure.

BMW used an electric water pump on the N55. Over time, the housing and the electronics inside degrade and fail. N55 water pumps are notorious for their low lifespan.

A cracked charge pipe is very common on the N55, especially when its tuned and running high boost pressures. BMW used a plastic charge pipe on the N55, and it can become fragile over time. Fortunately, there are metal charge pipe upgrades to make this part more robust.

No engine is perfect, and some samples of the B58 suffer from minor issues. Most B58 owners will have a trouble-free ownership experience and spend less on maintenance than if you were driving a N55-powered BMW.

The B58 uses two coolant tanks in its system. Some owners are reporting coolant losses in the main tank and possibly in the second tank. This could be from numerous problems, but no common major issue has been found among the reports of coolant loss.

The rough idle is a symptom of the VANOS solenoid. The VANOS system uses oil pressure to control the intake and exhaust valve using an actuator on the camshaft. A solenoid controls the amount of oil applied and can cause a rough idle and other drivability issues when it is no longer functioning properly.

Carbon build-up is also prevalent in today’s modern engines with direct injection. Deposits can cause misfires and power loss. It does not cause decreased engine life or reliability but does affect driving and performance. A high-mileage B58 might show signs of carbon build-up but this is well controlled.

Tips for keeping your N55 and B58 reliable

To increase the longevity of either your N55 or B58, it is recommended that you follow the regular maintenance schedule and stay on top of preventive maintenance.

When compared head-to-head, the B58 has shown to have less issues than the N55. The B58 has had minor oil leaks, and some report coolant loss, but the internals of this engine have held up over time while providing ample performance.

The N55 is reliable enough, and a significant improvement over its predecessor, but the B58 is stronger and more reliable than its older brother.