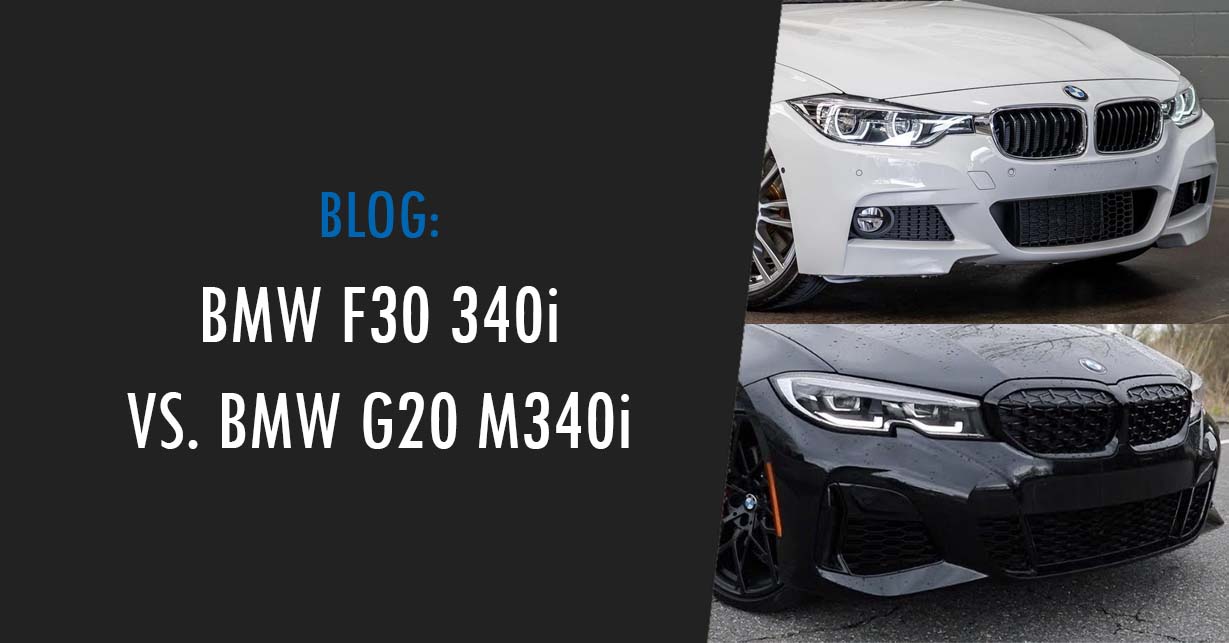 The BMW F30 3 Series generation was replaced by the G20 3 Series back in 2019. Both the F30 340i and G20 M340i are just below the M3 models of their respective generations in terms of performance. How do they stack up against each other?

The new “M-lite” badge should give us a hint of how the new G20 performs compared to its successor. These two are not too different from each other, sharing the same engine and transmission, but one is certainly better than the other.

How does the BMW F30 340i compare to the BMW G20 M340i in terms of performance, road handling, interior amenities, drivetrain options, styling, and price? Here is a full head-to-head comparison between these two top-of-the-line 3 Series.

As far as tuning these B58 engines is concerned, both can be tuned to achieve similar power outputs. However, it should be noted that the B58 in the G20 M340i reacts better to mods, and the M340i can reach higher power levels.

Both of these cars can be turned into the 600 wheel horsepower territory with the right aftermarket upgrades and ECU tuning. If that is not enough for you, and you’re looking for the absolute highest performance in a 3 Series form factor, consider the F80 M3 or the G80 M3. The S58 of the latter is considerably more potent than the B58.

BMW purists tend to agree that the older a BMW model is, the more engaging and connected the driving experience is. This also applies when comparing the F30 340i to the newer G20 M340i. However, the difference between these two is smaller than when we compare an E90 to an F30.

Both the F30 and the G20 have electric power steering, which makes steering feedback and road feel subdued and artificial. The G20 has increased noise and vibration isolation which makes the driving experience a bit number and more akin to a 5 Series. The F30 is lighter than the G20 as well, weighing around ~150 lbs less in an equivalent configuration.

Despite the added weight, the G20 M340i offers sharper handling

Despite a higher curb weight, the G20 M340i has a stiffer suspension from the factory, and a 50% more rigid chassis. Apart from the improved suspension and chassis, the limited-slip differential makes it a more capable car when it comes to cornering and putting the power down. The M adaptive suspension is also improved when compared to the F30.

In summary, the F30 340i and the G20 M340i are more powerful and capable than any previous 3 Series. They’re faster in a straight line and incredibly capable in the corners, but both will feel very isolated from the road if you’re used to driving older BMWs.

Both are offered with either rear-wheel drive or all-wheel drive (xDrive). However, the G20 M340i comes with a BMW M xDrive system which can send 100% of the power to the rear wheels at all times and this can be done by simply selecting an option in iDrive, something that is not available in the F30 340i.

The BMW M340i is available with M xDrive and a limited-slip differential, but it lacks the manual transmission found in the F30 340i

We also need to mention that only BMW M models get a limited-slip differential meaning that the G20 M340i has one while the F30 340i relies on a more conventional open differential which emulated an LSD by applying brake force to the wheel that breaks traction which isn’t nearly as smooth or well-integrated as a true mechanical LSD.

We are all aware that new performance cars don’t sound as good as they used to. With ever more rigorous emissions and sound regulations, automakers are forced to make quieter and more restrictive exhaust systems which translate to reduced exhaust noise and muffled sound. Both the 340i and the M340i sound more or less the same for pre-2021 models.

Even though all of these are equipped with the same B58 engine, 2021 and up M340i models come from the factory with a more restrictive exhaust system to meet emission regulations. BMW tried to countereffect by playing fake exhaust sounds through the speakers which any driving enthusiast can tell apart from the actual sound of the exhaust.

The best-sounding 340i model from these two generations is undoubtedly the F30 340i with the BMW MPPSK option.

Looks are subjective, so we are going to keep this short. The F30 generation is regarded as the most aggressive-looking 3 Series with its sharp front edges. The G20 looks chunkier, has soft edges, and a more grown-up look that resembles a 5-Series. The new design philosophy of the G20 is most noticeable from the rear where the G20 M340i looks a lot more modern due to its slim LED taillights and large exhaust pipes.

The BMW F30 generation was more of an evolution than a revolution over the previous E90 generation regarding interior design as the basic layout remained relatively unchanged. This means that the F30 offers an old-school BMW approach to design.

On the other hand, the G20 M340i is noticeably bigger on the inside and introduced a more revolutionary approach to interior design as the G20 features a fully digital dashboard with next-gen iDrive, and advanced ambient lighting. The latest G20 M340i LCI even gets a huge full-length dashboard dual touchscreen setup with the newest BMW iDrive 8. If you want to give your own touch to the interior, there are many interior mods for both vehicles.

When the F30 generation first came out, many people quickly realized that interior materials and fit and finish weren’t as premium as most have hoped for. The E90 generation had better build quality in many areas. As the F30 aged, this became a problem, as the interior started to look outdated quickly and the LCI did not do much to remedy that.

The G20 feels significantly better than the F30 in this regard as BMW finally came around with the G20 which feels every bit as premium as its other German rivals, surpassing them in many regards as well.

If your priority is not maximum performance or power figures, an F30 or G20 330i offers excellent value. The 4-cylinder models tend to cost around $5,000 less than their 6-cylinder siblings, and offer sublime fuel economy.

The G20 M340i is mere inches close to being a true “M” car, but the F30 340i was no ordinary BMW to begin with. Even though the G20 offers higher performance, more comfort, and a better interior, it simply can’t beat the F30 340i when it comes to value.

The performance gains are noticeable but if you don’t care about the added cabin technology, a tuned F30 340i with an upgraded suspension can be had for much less than an M340i and will give you a better driving experience.

If you’re looking for a BMW 3 Series with almost M3-level amounts of power but still want a practical daily driver with a comfortable ride, both the F30 340i and the G20 M340i are arguably the best offerings on the market when looking for a modern sports sedan.