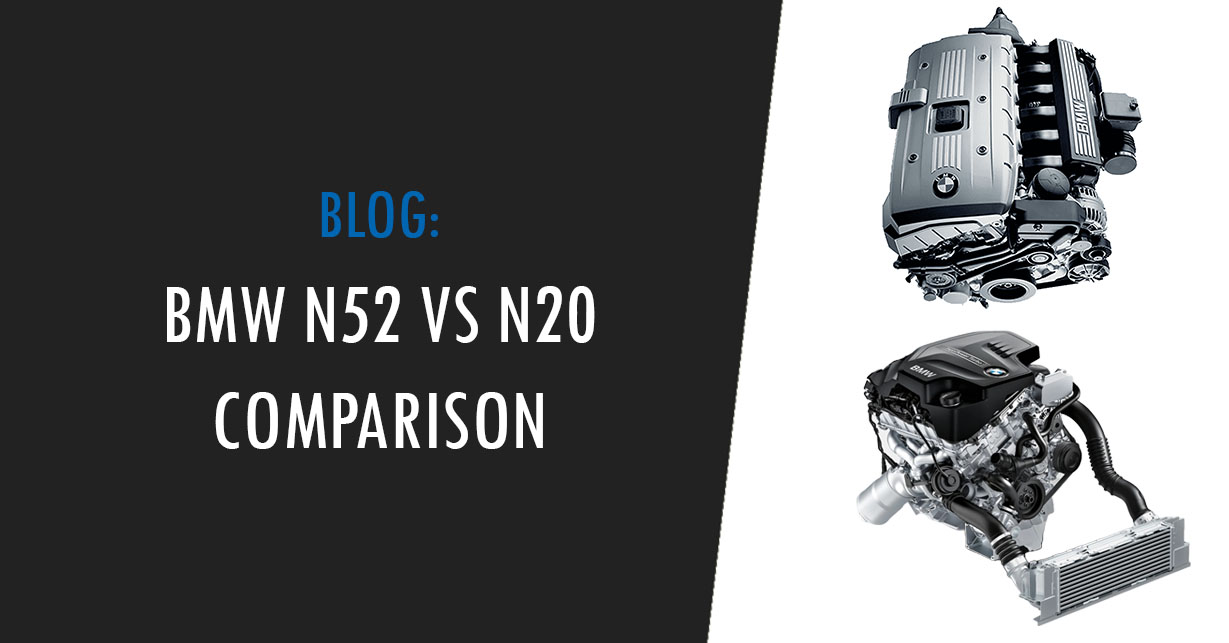 BMW introduced the N20 engine as a direct replacement for the N52, producing almost the same horsepower, with higher torque and better efficiency. This was a turning point in the Bavarian manufacturer’s history as BMW has long been recognized for engineering excellent naturally-aspirated inline-six engines.

The N52 was BMW’s bread and butter for a decade and powered cars from the 1 Series all the way to the 7 Series. Although it isn’t a particularly powerful engine, its smoothness, refinement, linear power, and reliability have been praised by drivers looking for a practical daily driver.

The N20 was a significant departure from BMWs inline-6 roots with its turbocharged inline-four configuration, and although BMW purists and enthusiasts resented the move, tightening regulations and the need for fuel efficiency improvements were some of the biggest reasons for BMW to abandon its long history of naturally-aspirated inline-6 engines.

How do the BMW N52 and the N20 compare to each other in terms of power delivery, reliability, tuning, sound, and efficiency?

Although the above numbers are similar on paper, in real-world driving these two engines feel very different. The N20 produces 15 fewer hp than the N52 straight-six but has 40 lb-ft greater torque, all of which is in the low end. The N52 has linear power with torque in the middle-to-upper RPM range, whereas the N20 has a lot of torque on the low-end of the RPM range.

The N20 outperforms the N52 in regular city driving, where you are more likely to stay in the lower end of the RPM range. The N20 strikes the proper combination between performance and efficiency, and it will feel like a more powerful engine when driving around town.

To exploit the horsepower of the N52 you’ll need to rev it way beyond 4,000 RPM, as it produces its peak HP at 6,650 RPM. The BMW N52 is a lot of fun when paired with a lightweight RWD manual car such as the 128i, as this helps extract most of the power possible out of the engine.

N52 vs. N20 Reliability: which engine is more reliable?

The N52 is the result of decades BMW has spent improving and refining the straight-6. It is a reliable, long-lasting, stout motor with no major design issues, and can withstand abuse better than most engines. Due to its relatively simple naturally aspirated design, the issues of the N52 are reduced to almost only oil leaks, brittle coolant hoses, and failing water pumps. Catastrophic failures are very rare.

This engine is very unlikely to leave you stranded. Install a new water pump if there is no history of it being replaced, replace the mickey mouse coolant flange, keep an eye on the accessory belt, change the oil regularly and you’ll have a very reliable motor for hundreds of thousands of miles.

Turbocharged engines are more complex and are subject to more strain. The N20 was BMW’s first attempt at a turbocharged 4-cylinder engine, and many lessons were learned. Due to a design flaw and improper materials, the plastic timing chain guides in the N20 break down over time, leading to catastrophic engine failures when the timing of the engine eventually skips and the pistons make contact with the valves.

BMW tried to rectify the issue with updated timing chain guides on N20s manufactured after 2015. But many early N20s will suffer the unfortunate fate of a timing chain guide failure, an issue that requires complete timing chain replacement, which is very labor intensive. If that wasn’t enough, the N20 also suffers from oil leaks, failing injectors, and failing turbos at high mileage.

Without a doubt, BMWs with naturally-aspirated straight-6 engines such as the N52 or the M54 are far more reliable and will cost less to maintain than the N20.

A tune, headers, and upgraded DISA can increase the horsepower of the N52 by ~40hp, but beyond that it’s difficult. The N52 can also be equipped with a supercharger kit, which is expensive and not very cost-effective.

That said, the N52 was not designed with high-performance numbers in mind, and the tuning community around it is small. Although it is a strong engine, its naturally-aspirated design makes it not ideal for tuning.

The N20 is receptive to tuning and mods, unlike the N52

The N20 engine is much more fitted for tuning and performance upgrades. Even though the BMW N20 isn’t really well-known as a tuner engine, the engine is manufactured to output substantially more torque from the factory with room for even more. Due to its turbocharged design, it is better for tuning and well receptive to mods. A catless downpipe and a tune can add ~50 whp for a relatively low cost.

But since the N20 is a relatively small engine, you can’t just throw a ton of aftermarket mods into it and hope it reaches the power level of turbo inline-6 engines.

The BMW N20 is more fuel efficient due to it being a lower displacement engine with a direct-injection system. BMW used every technology they had at hand to make the N20 an efficient engine. A turbocharger, fewer cylinders, lower displacement, electric steering, and a modern direct-injection system make the N20 excellent in terms of fuel consumption considering its power.

Fuel consumption is lower on the N20

On the other hand, the N52 is not as fuel efficient. It has two cylinders more than the N20, and it features an older port injection system and hydraulic steering. If you’re looking for fuel efficiency, the N20 is the clear winner here.

When it comes to engine sound, most people would agree that the N52 sounds better than the N20. The N52 has a smooth refined sound due to its straight-six configuration. It’s whisper quiet at low RPMs and has a noticeable growl at higher RPMs. Overall, its cabin sound is pleasant at all RPMs.

The N52 sounds better than the N20

On the contrary, the BMW N20 is a raspy 4-cylinder. The N20, being equipped with a direct-injection system and having a 4-cylinder configuration, sounds almost like a diesel engine. It doesn’t have an inspiring exhaust sound and it’s noisy so you can hear it in the cabin at all times.

The N52 superseded the M54 as the last NA straight-6 engine BMW would ever produce. Over the years it has proven to be a sturdy, reliable, and long-lasting engine with linear power delivery and a refined exhaust note.

In 2012, BMW introduced the N20, a single turbocharger 4-cylinder engine providing comparable horsepower and much higher usable torque; unfortunately, it’s not as reliable as its predecessor.

However, the N20 has shown to be an engine with good performance and efficiency that can easily be tuned over factory specs. Keep up with oil changes, and preventively replace the timing chain if you hear any unusual noises coming from the engine bay and you’ll have a reliable engine for many thousands of miles.