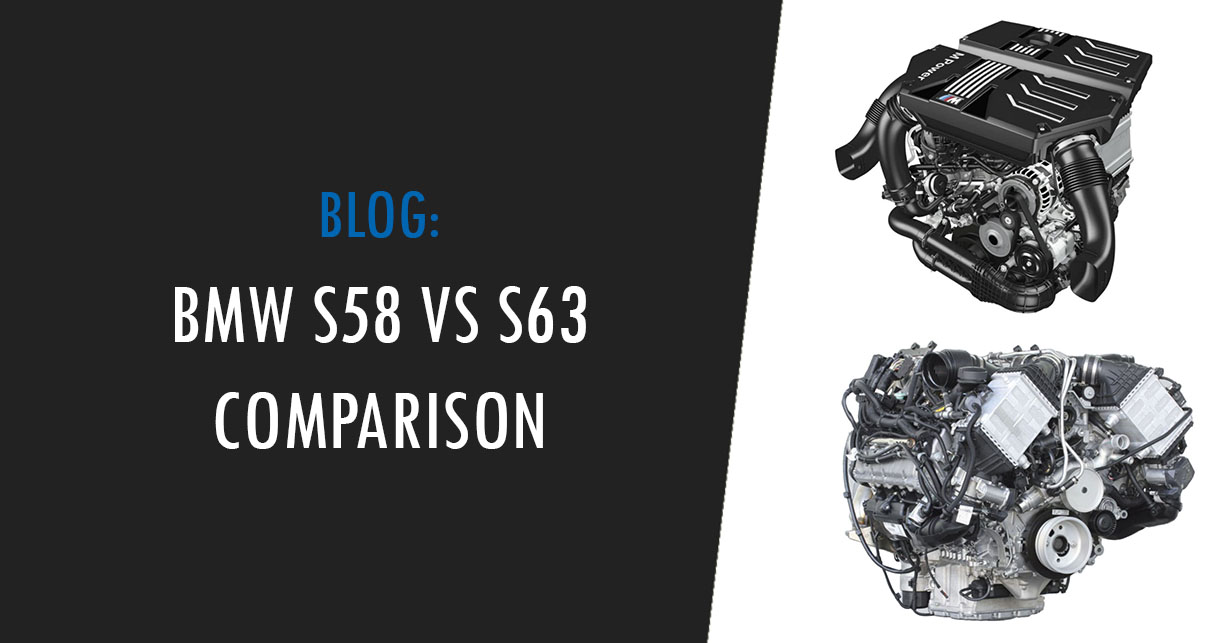 Since the mid-2000s, BMW has been developing some of the best-performing turbocharged engines the automotive world has ever seen. The S58 and the S63 power the latest generation of M cars. How do they compare against each other?

The BMW S58 is the newest twin-turbo inline-6 engine powering cars such as the newest G80 M3 and G82 M4. In the short time it has been out it has already demonstrated to be an incredibly capable powerplant with tons of tuning potential.

On the other hand, the BMW S63 has been around for over a decade, powering “big” M cars such as the M5 and X5M. This engine has evolved over the years, and BMW has improved its power delivery and reliability over the years. At the core, it remains a twin-turbocharged 4.4L V8 with a hot-vee layout that reduces turbo lag.

Lets compare the S58 and the S63 in terms of horsepower, torque, power delivery, tuning potential, exhaust sound, and reliability.

BMW S58: even better than its predecessor

The BMW S58 is a twin-turbocharged 3.0L inline-6 engine. Redline is 7,200 rpm. Based on the BMW B58 engine, the S58 is considered a high-performance variant with major modifications such as an additional turbocharger, a reduced stroke, an increased bore, and larger valves for better cylinder head flow.

In terms of block construction, the S58 uses aluminum for a closed-deck block that is both strong and lightweight. Internal construction features forged chrome molybdenum heat-treated steel crankshafts, smoother bearings, and crankpins, and forged connecting rods. Pistons are also forged with anti-friction coating.

The S63 is a twin-turbocharged 4.4L V8 engine. Redline is set at 7,200 rpm. The S63 uses two twin-scroll turbochargers that work together with a cross-engine exhaust manifold to keep exhaust pulses flowing to the turbos every 180-degree rotation of the crankshaft. The S63 engine uses air-to-water intercoolers to improve cooling and throttle response.

Similarly, the S63 is the high-performance version of the N63. Both the S63 and N63 engines use the same aluminum-silicone alloy blocks with identical cylinder dimensions. However, the S63 has some key differentiating factors that allow it to output higher power, such as a more aggressive cam profile, bigger turbos, higher redline, higher boost pressure, and improved cooling.

In terms of power and torque in stock form, the S63 is more powerful than the S58, with 523 hp compared to the 474 hp of the S58. Both engines output an excellent amount of low-end torque but the S63 has an inherent advantage due to its higher displacement and V8 configuration.

From the factory, the S63 outputs more horsepower and torque.

The S58 outputs 443 lb-ft of torque while the S63 outputs a considerably higher 553 lb-ft which also comes earlier in the RPM range, making the S63 feel more powerful around the city in low-rpm scenarios.

Both engines are excellent for tuning, but the S63 will be a better option than the S58 if you’re looking for an absolute monster of a vehicle. The 4.0L V8 can be pushed further than the 3.0L I6. Higher displacement and a higher cylinder count can withstand heavy tuning; the limits on a stock S63 block are higher than a stock S58 block, but not by much.

That said, the S58 is known to be more reliable when tuned and also has a bigger tuning community. There is more information available and a variety of parts to tune the S58 to your exact needs and budget.

Both engines can be tuned easily for significant power increases, but the S63 has a higher limit.

Simple mods can increase performance significantly. A simple catless downpipe and a tune can increase wheel horsepower (WHP) by ~150 on both platforms. Bolt-ons can take the S58 to 700 WHP while the S63 can reach 850 WHP with the same mods. Other bolt-on mods include upgraded intakes.

The S58 and the S63 have very different exhaust notes due to one being an inline-6 and the other one a V8. The S58 exhaust outputs a raspy engine note that with the stock exhaust leaves a lot to be desired. Although it is the best-sounding twin-turbo inline 6 BMW engine to date, it doesn’t convey the same aggressiveness and growl as a V8 such as the S63.

The S63 exhaust outputs the right mix of the raw V8 rumble and the sounds of two turbochargers spooling. Upshifts are magnific and downshifts sound even better. At full tilt, it is very loud with a sophisticated aggressiveness.

The S63 sounds much better than the S58.

Compared to its predecessor, the S58 improves exhaust sound slightly. With the exhaust stock system, the engine note still sounds subdued and doesn’t transmit well the sheer power of the engine. Exhaust mods such as an Akrapovic exhaust can improve exhaust sound substantially, but it still won’t match the sound of an S63 with a simple downpipe.

The S58 will be a more reliable engine in the long term than the S63. BMW inline-6 engines are known for being stout powerplants that can last hundreds of thousands of miles; after all, they are relatively simple engines. On the other hand, turbocharged BMW V8s aren’t praised for their reliability, as they often require labor-intensive maintenance.

Early S63 iterations had a fair number of issues that could cause insufficient oiling, and eventually catastrophic engine failure. The current S63 iteration (S63B44T4) has undergone a number of improvements such as oiling and cooling improvements that make it more reliable. High mileage S63’s aren’t uncommon.

The twin-turbo high-strung nature of the S63 can create very hot temperatures around it which degrade the oil quickly. Coolant hoses, turbo lines, and other components can fail prematurely due to the heat of the turbos as they are placed right in the middle of the engine bay. Common issues of the S63 include VANOS issues, failing ignition coils, and excessive oil consumption.

On the other hand, none of the above issues affect the S58. Complete engine failure is rare and you should expect to get hundreds of thousands of miles out of this engine as long as the oil is changed frequently and the car isn’t pointlessly abused every time it is driven.

Conclusion: which engine is better?

It all comes down to personal preference. Do you prefer a compact sedan with massive amounts of torque that can still handle a twisty road such as the M3? Or would you rather have a luxury cruiser with lots of technology and interior amenities with seemingly endless power such as the M5? Do you prefer the engine sound of an Inline-6 or a V8?

Both the S58 and the S63 are likely to surpass your expectations and more so if you opt for aftermarket performance modifications with a respective tune. Which engine do you prefer?