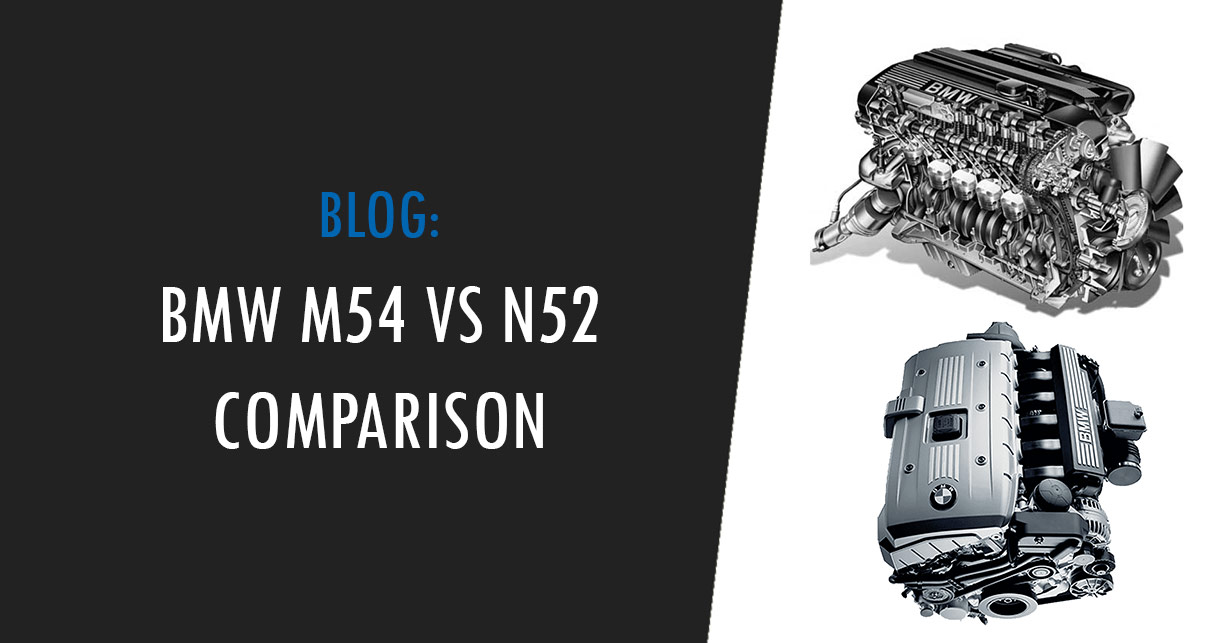 The M54 and the N52 engines from BMW will go down in automotive history as the last naturally aspirated straight-six engines ever made by the Bavarian manufacturer. Although BMW is now making history again with incredibly strong and performing forced-induction engines, the true roots of the company lie in decades of delightful NA engines.

The M54 was produced from 2000 to 2006 and was used in virtually the entire BMW lineup as a successor to the M52. Most E46’s are equipped with this engine, displacements ranging from 2.2L to 3.0L. Compared to the M52TU it replaced, the M54 features a drive-by-wire fully electronic throttle body and power improvements.

Enter the N52, the direct successor to the M54. Produced from 2004 to 2015, the N52 uses a magnesium/aluminum composite and hollow camshafts to achieve a lighter block and significant weight savings compared to the outgoing M54. The belt-driven water pump is also replaced with an electric water pump and Valvetronic is introduced.

Both engines are relatively torquey and very smooth in the mid-range, but the main difference lies in the higher rpm range where the N52 wins with significantly higher power output at 4500+ RPMs and a higher redline.

The N52 is the more powerful engine

Neither of these engines is known as a crazy powerhouse, but both the M54 and the N52 have more than enough power for driving enjoyment, especially when mated to a manual rear-wheel-drive drivetrain. An automatic xDrive model is not the way to go with these engines and may leave you with a bad impression due to added weight, powertrain losses, and altered driving dynamics.

Both the M54 and the N52 could be considered some of the most reliable and long-lasting modern engines ever made by BMW. A relatively simple naturally-aspirated design, the proven inline-6 configuration, and under-stressed stout engine blocks make these two powerhouses incredibly dependable even with just basic maintenance and frequent oil changes.

Both engines are very reliable, but M54 maintenance is cheaper

Common BMW problem areas can cause trouble in both the M54 and the N52. Issues such as the valve cover gasket leaking, plastic valve cover cracking, and oil filter housing gasket leaking are common in both engines. Water pump failure can happen on the M54, but it’s a much more common maintenance item on the electric water pump of the N52 as the electronics degrade after many heat cycles and the water pump stops functioning.

On the other hand, some of the most common N52 issues (apart from leaky gaskets) are belt tensioner failure, VANOS solenoids issues, PCV valve failure, and water pump failure.

M54 vs. N52 Tune-ability: are these engines tuner-friendly?

Neither of these engines is particularly known as being a tuner-friendly motor. Bolt-ons are a common upgrade for both, the most common being intake, headers, tune, and a less restrictive exhaust system.

The M54 can react well to upgraded headers, performance intake, a tune, and an exhaust. These upgrades won’t give you massive power gains, but you can expect a noticeable increase of 30hp more or less.

Although not as tuner-friendly as other forced-induction BMW engines of the same year, the detuned N52 found in the North American E90 328i can see respectable power gains with bolt-ons. The 3-Stage intake manifold from the early E90 330i can be retrofitted into the detuned N52’s and see gains of 20-25 hp. In addition, an intake, a tune, and modified headers can give a further output increase of 25 hp.

The N52 is a more tuner-friendly engine, but you’d be better off spending that money somewhere else

In BMW’s attempts to build a more refined drivetrain with less noise, harshness, and vibration, the N52 sounds subdued, and tame compared to the more vocal and raspy exhaust note of the M54.

With the stock exhaust system, the N52 is incredibly smooth, quiet, and refined in the low to medium RPM range, only waking up and letting itself be heard at full tilt above 5000 RPMs.

The M54 has a meaner, deeper sound in stock form

If you’re a car guy who loves the classic BMW straight-6 sound, you’ll prefer the deep, raspy, and raw sound of the M54 over the sound of the N52. If you like smoothness and refinement, the N52 is for you.

Overall, the N52 has slightly more power and better fuel consumption than the M54, making it the more efficient engine out of the two.

Due to a more modern design, the use of Valvetronic and Double-VANOS, the N52 consumes less fuel while also putting down more power than the M54. It achieves slightly better MPG on average and is also able to get ~32 MPG on the highway at moderate speeds. The reduced fuel consumption is impressive considering the N52B30 can output almost 260 hp; this is more than an 11% increase in power compared to the M54B30.

The N52 is more fuel efficient than the M54

That said, for a late ’90s 6-cylinder engine design, the M54 is incredibly efficient, achieving an average of around 23 MPG in a 330i E46, according to Fuelly.

BMW has completely phased out the M54 and the N52, replacing the latter with the N20 turbo inline-4, an engine that makes more power and consumes less fuel. This might sound great on paper, but a turbo inline-4 will never match the smoothness, linear power delivery, sound, driving feel, and reliability of the good old mighty NA inline-6.

In some years, these two engines will be relics of BMW history, some of the last ever made naturally aspirated straight-6 engines in a world quickly moving to lower displacement, forced-induction, and electrified drivetrains.