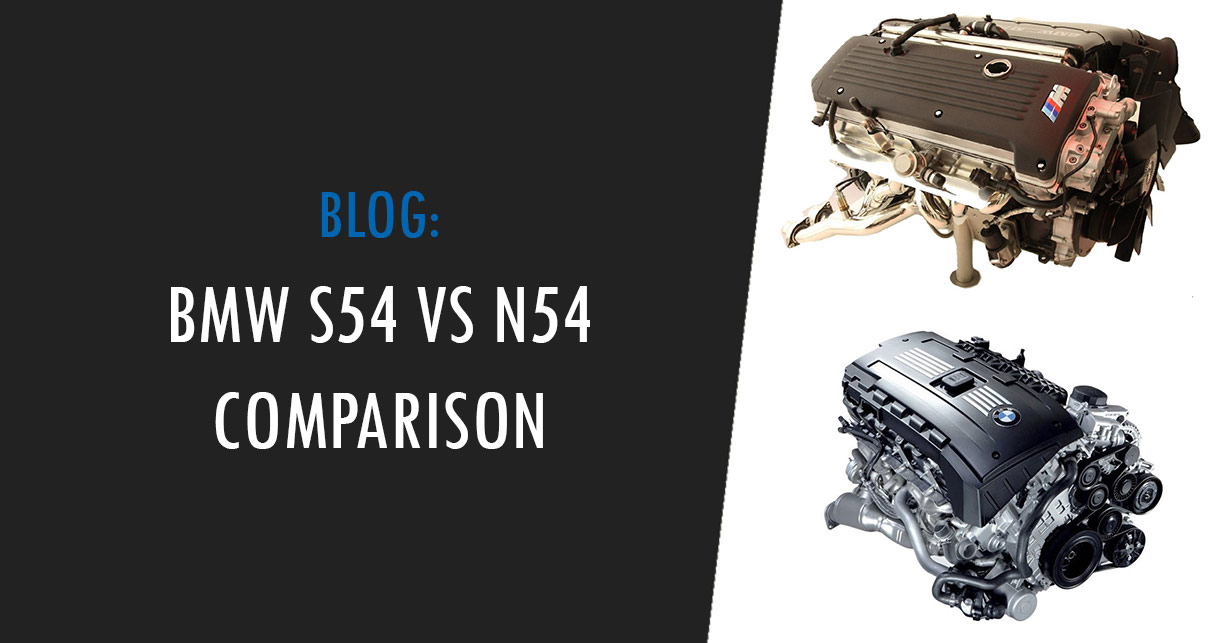 The S54 and N54 are iconic high-performing inline-6 engines from BMW. Although very different in terms of design and power delivery, these are both legendary engines that will go down in history as some of the best inline-6 motors ever made.

The E46 M3 introduced the S54B32 in the year 2000, with European models producing 338 hp and 269 ft-lbs of peak torque. It was praised for its revvy character and aggressive raspy tone. The S54 the last NA inline-6 engine used in a BMW M3.

Both of these engines make significant amount of power from the factory, with very respectable horsepower and torque figures even in stock form.

Power delivery is very different on both engines. The S54 is a high-revving naturally aspirated engine with most power high in the rev range. On the other hand, the N54 features two turbos, giving it plenty of torque down low that dies out in the high RPMs.

These engines have very different characters. The S54 is a high-revving NA engine while the N54 is a turbocharged torque monster.

When looking at the dyno chart of both engines, we can see how the N54 produces a high and consistent amount of torque from as around 3,000 rpm all the way up to 5,500-6000 rpm, making it ideal for those looking for usable power around the city. The S54 on the other hand needs to be revved up high to unleash its true performance figures. Revving up an S54 all the way to redline on public roads could get you into serious trouble before you even get to 3rd gear.

The N54 has a well-deserved reputation among the car tuning community. The N54 engine is stout, well receptive to modifications and a stock engine block can handle up to ~650 wheel horsepower and ~600 (ft-lbs) wheel torque reliably. A single turbo N54 with the respective accompanying bolt-ons can make 900-wheel horsepower, a feat that makes the N54 comparable to the venerable 2JZ engine of the MK4 Toyota Supra.

The N54 is more tunable than the S54, with the potential to considerably increase power with just a few mods and a tune.

On the other hand, the naturally aspirated S54 engine is not as receptive to mods. Full bolt-ons can bump power output moderately and there are available supercharger & turbocharger kits for a forced induction setup, and they are costly.

The S54 was the last naturally-aspirated inline-6 used on a BMW M3 while the N54 was the first twin-turbo direct-injected inline-6 engine made by BMW. This alone should tell you a lot about the reliability of both powertrains. The N54 was a groundbreaking engine but early models were problematic.

The N54 is known for injector failure, water pump failure, turbo wastegate rattle, vacuum leaks, among other issues. Of course, it also suffers from the usual gasket leaks of any BMW engine from the era. The engine block is solid and can handle tons of abuse and additional power without skipping a beat, but a lot of components around it tend to fail. Later iterations of the injectors and other ancillary components improved reliability but this is an engine that requires constant maintenance and can cost a fortune to maintain if you’re not DIY-inclined.

On the other hand, the S54 features a more simple design without turbochargers and without a cutting-edge direct injection system. The S54 is considered the pinnacle of high-revving high-performance naturally aspirated inline-6 engines, and this helps greatly in terms of reliability. That is not to say the S54 is bulletproof; rod bearings are its weak point. VANOS is also problematic on this engine and at some point it will need a complete rebuild or replacement.

The S54 is more reliable than the N54, although both engines are high-maintenance.

Even with its rod-bearing issues, the S54 is a more reliable engine than the N54. Both engines can easily make it to 300k and more miles before the block dies out if you keep up with oil changes and let the engine warm-up properly, but the N54 will likely cost you more in the process.

These two engines have completely different exhaust notes. The difference lies mostly in the N54 being a turbocharged engine that makes most of its power in the low-medium RPM range and the S54 being a naturally aspirated one that likes to be revved up to its rev limiter or 8000 rpm.

Although ranking exhaust sounds from best to worst is a very subjective matter, the vast majority of people would agree that the S54 sounds vastly better than the N54. The twin-turbo setup of the N54 with a stock exhaust muffles a lot of the engine sound note without extensive exhaust work and upgraded turbos.

To most people, the S54 sounds much better than the N54.

There’s no doubt that there are incredible sounding N54’s out there with aftermarket exhaust systems, and turbo sounds are awesome, but no straight-six engine can beat the sound note of the high-revving S54. Even in stock form with a stock exhaust, the NA S54 is a better sounding engine than the N54.

We’ve been comparing just the engines so far, but what about the most symbolic cars that are powered by the N54 and the S54?. We’re talking about the early E90 335i with year models from 2007 to 2010 compared to the mythical E46 M3.

The S54-powered E46 M3 has superior handling, balance, raw feel, and nimbleness, while the N54 335i can be faster in a straight line, while also being more comfortable and refined for daily cruising.

S54-powered cars are usually more expensive than N54-powered cars. The E46 M3 keeps appreciating in value and they are rare finds. The N54 was the powerplant of a large variety of BMWs, from the 1-series to the X6, and they are much more common and can be had for a lower price.

Both the S54 and the N54 will be remembered as one of the most iconic engines produced by BMW. One is a naturally-aspirated monster and the other one is a torque beast. Let’s just hope BMW keeps making engines like these two for many years.