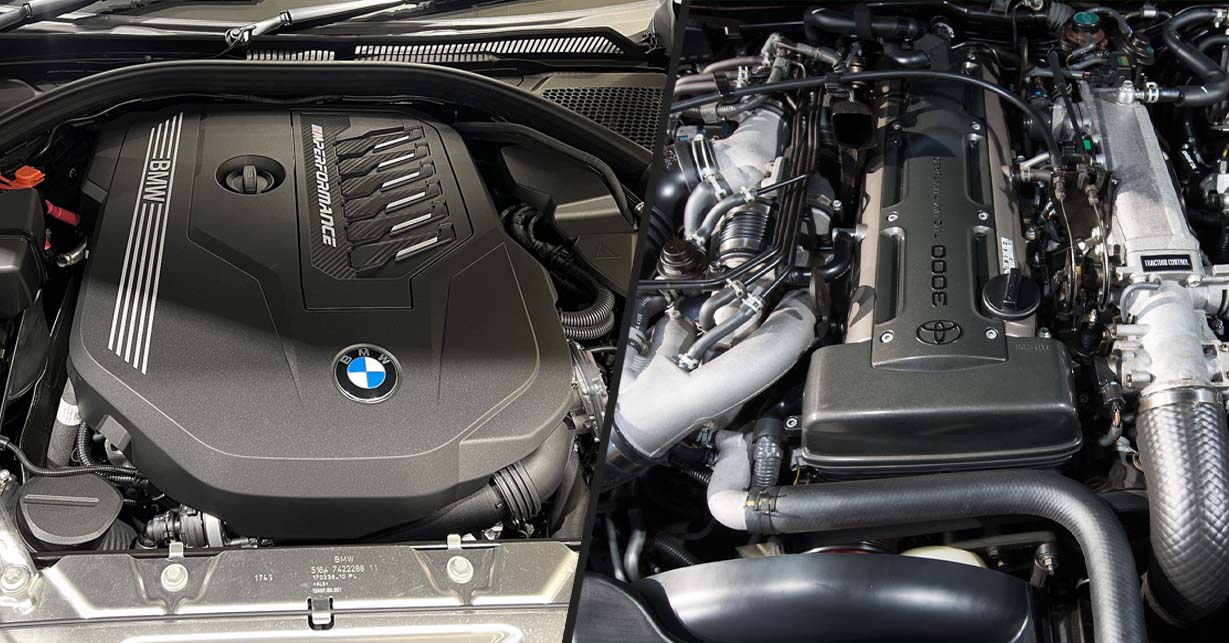 Most enthusiasts will agree that the BMW B58 and the Toyota 2JZ-GTE are some of the best turbocharged inline 6 engines. Both are powerful engines even in stock form, and they can be transformed into torque monsters with just a few bolt-ons.

The BMW B58 was introduced in 2015 and is being used in a wide array of BMW cars, the most notorious one being the M340i. It has been praised for its tunability, smooth power delivery, and reliability.

On the other hand, the 2JZ came out in 1991, almost 25 years before the B58. It powered the famous A80 Supra, and has been known as one of the best tuner platforms for the last couple of decades. It features a hefty cast iron block and sequential turbochargers.

Both are highly tunable engines, and both are available in different generations of the Toyota Supra. B58 vs. 2JZ full comparison:

BMW B58 vs. Toyota 2JZ Specifications

BMW’s B58 features a new under-square design with a beefed-up block and meaty pistons and rings. This makes the engine thrive in the lower end, but it inherently limits the engine when it comes to how high it can rev.

Both are very strong engines, but the 2JZ has the edge due to its cast iron block

A cast-iron block like the one in the 2JZ can withstand more pressure which inherently means that it can be pushed that little bit further.

Modern engineering allows aluminum blocks to withstand similar power levels without structural compromises, and the B58 has proved that it can withstand lots of added boost on a stock block.

Both engines have forged crankshafts, to further increase the strength, longevity, and reliability of all the rotating assembly. Neither engine has forged pistons from the factory.

The BMW B58 uses a modern valvetrain system with variable valve timing and variable valve lift. The timing chain is at the back of the engine for earlier models and at the front for the revised B58TU. VANOS and Valvetronic work in conjunction to improve efficiency and power delivery.

On the other hand, the 2JZ-GTE uses a more rudimentary valvetrain, with belt-driven camshafts. 1997 and later engines feature an early iteration of Toyota’s VVT-i variable valve timing. The 2JZ is a non-interference engine.

The 2JZ also differs from the B58 as it uses a camshaft lobe that pushes against the spring bucket. The overall design of the entire valvetrain system is much simpler which leads to it being a less fuel-efficient engine.

Another main difference is that the B58 features a timing chain that doesn’t need to be serviced. The 2JZ-GTE’s timing belt will eventually need to be replaced as it is a wear-and-tear item.

B58 vs. 2JZ Turbochargers

The sequential twin-turbo system of the 2JZ-GTE works this way: one turbo does all of the work until the engine hits 4,000 RPM. At 4,000 RPM the second turbocharger comes alive and both turbos spin until you hit redline.

This sequential turbocharger system helps provide a broad torque curve and great low-end power. Both turbochargers on the 2JZ-GTE are the same diameter.

Tuners often ditch the 2JZ’s sequential twin-turbos for a big single turbo as it allows for higher horsepower numbers at the cost of higher turbo lag. A single turbo setup can also increase reliability when done right.

The B58 features a split cooling system with two water pumps and two coolant reservoirs. The main water pump is belt-driven while the other one is electric and helps cool the turbocharger after the engine has been shut off. High-performance heat exchangers cool down the engine oil and the turbochargers when needed.

A neat trick of the cooling system of the B58 is that coolant is used to heat up engine oil in cold starts for a fast engine warmup.

On the other hand, the 2JZ features a traditional cooling system with one belt-driven water pump and one coolant reservoir.

The 2JZ relies on a pressurized forced circulation of the cooling system which includes a thermostat and a water inlet and the front of the engine. There are also heat exchangers to cool off the turbochargers and engine oil.

The 2JZ-GTE is a tuning legend. There are only a few engines in the world that can go toe-to-toe with it, and one of them is the BMW B58.

Regarded as a modern 2JZ-GTE, the B58 indeed has many similarities with its older Toyota counterpart. They feature the same engine configuration, a strong block with forged crankshaft and they’re both very receptive to modifications.

The B58 and the 2JZ-GTE are some of the best tuner engines, with huge power gains possible with a few mods

Both engines can be brought up to the 500-600 horsepower and 600-700 lb-ft of torque quite easily with just bolt-ons and a tune, without even needing to open the engine block or upgrade the turbochargers. This is more than enough power for the street for most users and its unlikely

A built 2JZ-GTE can make up to 2,000hp while the B58 has currently maxed out at about 1,000hp. These figures are the absolute maximum horsepower numbers that tuners have been able to extract out of both engines. You’ll need tens of thousands to get to this power level and after 700hp returns start to diminish.

The B58 is comparably newer; this means tuners are still figuring out how to extract the most power out of this engine.

If you’re looking for a 1000+ horsepower build, we recommend you instead opt for an S58 or S63 powered car. It will be more cost-effective in the long run as the B58 has diminishing returns after 900 hp.

The most common BMW B58 mods include a tune, an intake, and a catless downpipe. You can also upgrade the fuel pump and the injection system. For massive power gains, a larger turbo is necessary.

Best mods for the 2JZ-GTE:

On the other hand, the best 2JZ mods include a bigger front-mount intercooler, a new exhaust, an ECU tune-up, faster road cams, upgraded injectors, and fuel pumps. Similarly, the sequential twin-turbos can be replaced with a single big turbo for excellent horsepower gains. This will alter the power delivery significantly but it is needed to extract the most power possible out of the engine.

It is highly recommended to upgrade the bottom end of both the B58 and the 2JZ-GTE if you plan on pushing beyond 800 hp. Although both engines have robust blocks and internals, the bottom end will give you before anything else. Forged pistons and rods are a must if you want to maintain durability. The 2JZ-GTE will also need larger head studs to keep the head safely attached to the engine block.

A larger turbo will be necessary if you want to get to the 1000-hp territory on both of these engines. Common turbo upgrades for the B58 include the Vargas turbo. The 2JZ-GTE can be upgraded with a turbo of at least 72mm.

Despite having the same Inline-6 configuration, the B58 and the 2JZ-GTE sound different, and their exhaust notes are easily distinguishable. The B58 exhaust sound is refined, clinical, and deep, while the 2JZ is generally louder and sounds visceral and raw in comparison.

The B58 can be loud on a cold startup, but without a proper exhaust you will not be able to experience its full roar. In stock form, it sounds tame unless the car has been equipped with the MPPSK package as the exhaust will let out more sound.

If we compare heavily-modified examples, the 2JZ takes the crown as it sounds absolutely legendary. Just the right amount of loud and the right amount of raspy. A big single turbo setup with a proper intake and exhaust can sound more aggressive than any other inline 6.

Indeed, the 2JZ aftermarket exhaust scene had a 25-year head start on the B58, but a big turbo B58 with the proper exhaust can sound remarkably similar to a big turbo 2JZ-GTE.

B58 vs. 2JZ Reliability & Maintenance

The B58 is BMW’s latest single-turbo inline-6, and it has already proven to be a very reliable unit with no major issues. The engine block is robust, and the injectors, cooling system, and turbochargers hold up well at high mileage. Definitely a massive reliability improvement over the N54 and N55.

Despite its high dependability, it can suffer from minor issues such as coolant loss, high oil consumption, oil leaks at higher mileage, and potential carbon build-up. Keep up with oil changes and basic maintenance and the B58 will last many years.

Both engines are highly reliable, but the 2JZ is simpler and will most likely outlast the B58

On the other hand, the 2JZ-GTE is simpler and will most likely outlast the B58. Even after 30 years some still deem it one of the most reliable and durable high-output engines ever made. Its cast-iron block is regarded as “bulletproof,” and the simple but clever design eliminates issues that plagued other turbocharged engines of the era.

That said, the 2JZ is not completely trouble-free. The timing belt tensioner bracket that holds the belt in place tends to fail. The crank pulley will eventually need to be replaced with an upgraded piece as it will eventually come apart. Replacing the oil pump seal is also recommended as it tends to wear out.

The B58 factory turbo rarely fails, and it is uncommon that it’ll need to be serviced apart from an oil line leak at high mileage. The 2JZ-GTE has a relatively simple twin-turbo design that can have issues, although it is very reliable when we compare it to other turbocharged engines from the ’90s and early 2000s.

The BMW B58 is certainly a step in the right direction as far as making new inline-6 BMWs the ultimate tuner machine. The 2JZ is a much simpler engine that can withstand more power due to its strong cast iron block, and it’ll be more likely easier to maintain.

The B58 is incredibly refined, robust, reliable, and powerful. An excellent daily driver but we doubt a highly modded sample is going to be able to reach the 2000 hp of a built 2JZ.

Therefore, the BMW B58 is a modern interpretation of the 2JZ, and it does resemble its older JDM cousin in more ways than one. However, the “modern” part of it all is that the engine had to be more civilized and compliant with extremely rigorous emissions and efficiency regulations.