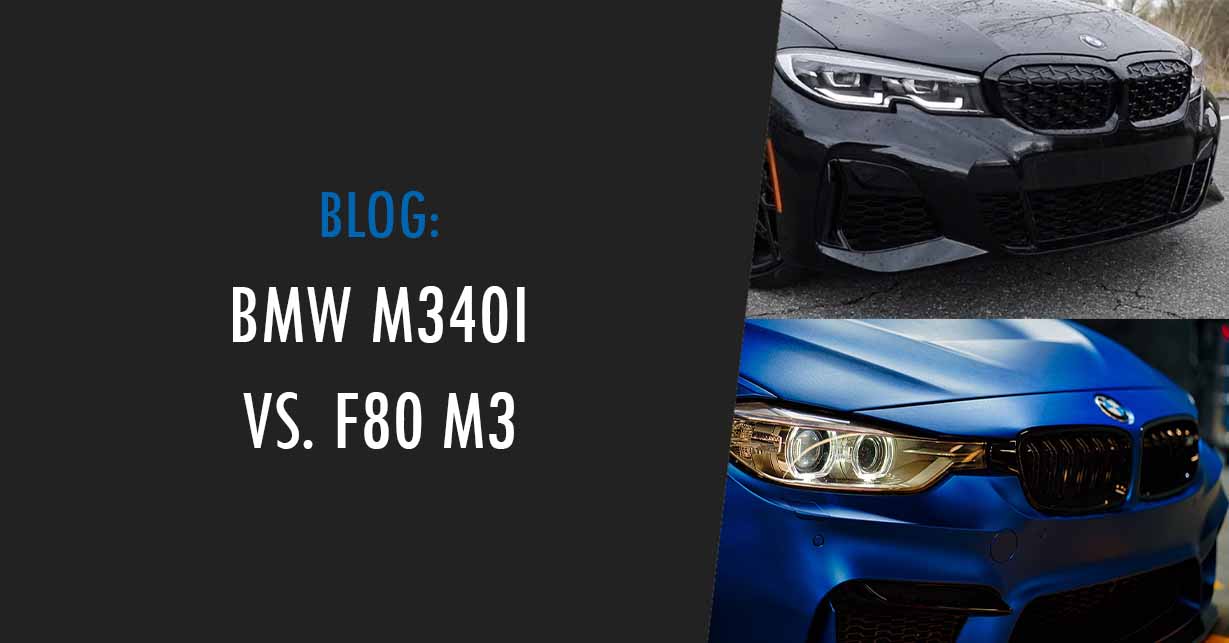 BMW released the M340i in 2019 as the successor to the 340i, with drivetrain and engine upgrades bringing it very close to the M3. The BMW F80 M3 started production in 2014 and has been regarded as one of the best sports sedans ever made. It offers outstanding performance while also serving as a 4-door sedan where you can carry around a family comfortably.

Both are true German sports sedans, with character, performance, and refinement all in mind. The M340i is a refined, comfortable sedan with more than enough power for the street, while the F80 M3 leans more towards raw performance.

How does the G20 M340i compare to the F80 M3 in terms of acceleration, handling, transmission options, look, and sound? Here is the full comparison between these two BMW sedans.

When starting around 40 mph, the F80 M3 will be able to put all the power down to the ground, and it will outperform the G20 M340i xDrive by a small margin.

When we compare RWD models, the F80 will accelerate faster than the RWD M340i from a stop and roll. The twin-turbo S55 has much more low-end torque than the B58, not to mention the F80 can put its power down more effectively due to a more aggressive suspension setup and wider tires.

Both vehicles offer outstanding acceleration, and it’s hard to beat the F80 when traction isn’t a limiting factor. However, the G20 M340i xDrive is the fastest accelerating vehicle out of the two when starting from a stop.

The F80 M3 handles better than the G20 M340i, there is no way around it. Being a true M-car, the F80 M3 has enhanced suspension, stiffer bushings, weight reduction, and other improvements to make the car handle better and have a more engaging driving feel, straight from the factory. It weighs ~250 lbs less than the M340i as well.

There is no doubt that the M340i is a very capable car, not only accelerating but also in the corners. BMW knows how to design a balanced chassis that feels agile and planted in the corners. The G20 platform has again improved driving dynamics despite the increased weight and size compared to older 3 Series generations.

The F80 M3 is a lighter, smaller car, with stiffer suspension and bushings, extra body rigidity, and a more aggressive alignment, among many other things, straight from the factory. The M340i has inferior performance in the corners, and less engaging driving feel compared to the F80.

The 7-speed dual-clutch transmission in the F80 M3 shifts very quickly and can hold a lot of power. A downside of the DCT is it can be a bit jerky in first gear, reverse, or slow driving situations. Maintenance is also more costly on this transmission, and sourcing a replacement could be difficult if anything goes wrong.

Both are equipped with excellent transmissions; the F80 M3 offers a 6-speed manual

On the other hand, the ZF 8-speed unit in the M340i is a widely used transmission, generally considered the best torque-converter automatic. It is smooth in all driving conditions, reliable, and can hold power even in highly tuned cars. Shifts are slightly slower than the F80’s DCT during hard driving, but it’s hard to tell the difference. The B58 and the ZF8 pair up perfectly, and it feels like they’re meant to go together.

Transmission-wise, the F80 M3 wins solely because it can also be equipped with a 6-speed manual for maximum engagement and a more traditional driving experience.

Only available in a RWD drivetrain configuration, the F80 M3 stays true to the roots of BMW M-performance. This rear-wheel drive configuration can prove better during aggressive driving conditions or on the track, but acceleration from a dead-stop can suffer.

The G20 M340i is offered in both RWD and xDrive AWD

The G20 M340i is available in both RWD and AWD (xDrive) layouts. Both are excellent choices and give purists the option of ordering a RWD car. If you opt for the x-Drive model, you’ll have the best possible acceleration from a stop and great grip in all weather conditions. The RWD model weighs less, will exhibit less understeer when turning and accelerating, and also lets you run more flexible tire setups. Both of the M340i models are equipped with a limited-slip differential.

The clear winner in terms of drivetrain options is the G20 M340i, as it can be had in a RWD or AWD configuration, while the F80 M3 only offers RWD.

Although this is an objective measure, we can all agree that the F80 M3 is one of the best-looking BMWs. A combination of classic BMW looks, modern contemporary aggressiveness, and a traditional small front grille compared to the more recent lineup makes the F80 a true classic that will look good for decades.

The F80 M3 is a much better-looking car overall, and it’ll remain an iconic design, just like previous BMW M3s.

The F80 M3 has a sharper, bolder design

As the product of a recent redesign, the G20 M340i is another fantastic-looking vehicle. But its softer edges, more pronounced grille, and bigger dimensions make it much less eye-catching. The rear is incredible, and the new taillights match the rest of the vehicle well, but the M340i exterior design is inferior compared to the wide wheel arches, quad exhaust, and aggressive lines of the F80 M3.

Despite being an M-car, the F80 M3 sounds subdued, and the S55 doesn’t have the best reputation for outputting the most pleasing sound out of the exhaust. The twin-turbo setup in the S55 of the F80 M3 muffles a lot of the sound, resulting in a mediocre engine note even with a custom exhaust setup.

On the other hand, the B58 of the G20 M340i has a deeper and richer engine note. It sounds elegant and quiet with the factory exhaust, but if you want to make it louder and more aggressive, a simple catless downpipe can enhance engine sound tremendously.

The M340i is undoubtedly the best-sounding car out of the two, combining the classic inline-6 rasp with just the right amount of turbo noise.

If you value interior amenities, room, quietness, and ride comfort, the G20 M340i is an excellent choice and far superior to the F80 M3. Its softer suspension, roomier cabin, more modern interior, and cabin quietness are outstanding for such a high-performance car.

Interior amenities and comfort are exceptional in the M340i

The F80 M3 is not an uncomfortable car by any means, but it has an older interior design with less technology, and its firm ride can be jarring if the roads are not smooth. The M3 prioritizes performance and handling over passenger comfort and softness.

BMW stopped production of the F80 M3 years ago to give way to their new generation of M3. Used samples are often seen in the market at well below the MSRP of ~$73000 USD when new. The M340i is still being produced and has an MSRP of ~$56,000 USD, and early model samples can be found well below what you can find any F80 M3 for.

The G20 M340i offers a better value for the money

Unless you plan on building the ultimate track machine, the G20 M340i offers an excellent value for the money, and we would consider it a much better buy. It also has lower running costs than the F80 M3 due to its reliable B58 engine.

When looking for sporty sedans, the BMW G20 M340i, and the F80 M3 might seem like similar cars on paper. Both are offered with turbocharged 3.0L inline-6 engines and have an excellent balance of nimbleness and comfort. Looking at them more in detail, we find out that the M340i is a comfortable sedan with performance, while the F80 M3 is a high-performance sedan with comfort.

It all comes down to each individual’s preferences. Do you need a 4-door that can also be a track weapon, or a practical daily with all-wheel-drive to put the power down year-round? Which one do you prefer?