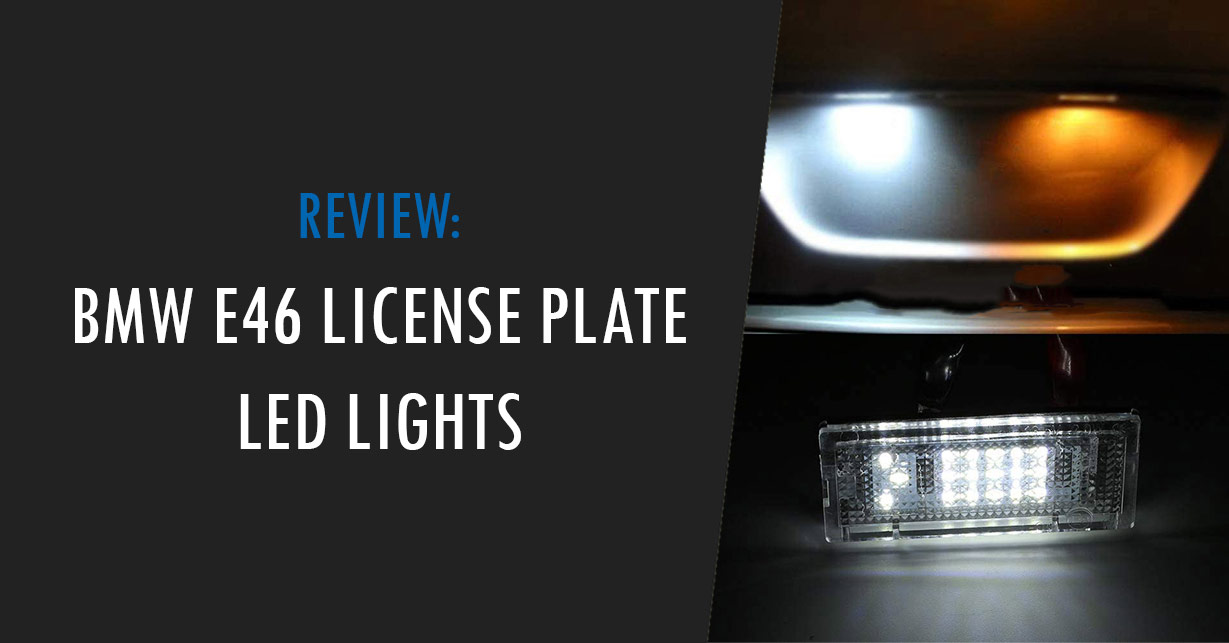 The BMW E46 features two light bulbs that illuminate the license plate at night. License plate lights can be replaced with LED bulbs for higher light output, crisp white light, and long durability. Installing the right LEDs is key as they need to have an integrated chip to avoid flickering or errors.

In this article, we’ll present a list of LED license plate light options for your BMW E46 and let you know the features you should keep an eye on. Let’s get started:

With the iJDMTOY model, you get an extremely bright, 18-piece xenon light device featuring LED diodes. It is 3-watts strong and is three or more times brighter than the original factory license plate light. The LED light is bright, clear, and has a more white tone than the factory halogen bulb.

Not only does this model give your E46 a more modern and luxurious look, but it helps enhance your safety during nighttime driving.

This model is a direct replacement – expect no extra screws and no extra hassle, as long as your E46 is a supported model. It features CAN-bus error-free decoders for no flickering or error codes.

If you own a 1998-2003 BMW E46 3 Series Sedan, this license plate light LED replacement will not only prove to be a fitting replacement, but also a huge improvement, as it’s three or more times brighter than the default light on E46 models. This is due to the 18-piece xenon white LED diodes that boast high light output.

This is a 3W LED light that’s very powerful and will help evoke a modern and prestigious appearance on your E46, even though your vehicle might be two decades old.

The replacement process is also very straightforward – no extra screws are required, as long as you’re installing on a compatible model (1998-2003 E46 3 Series Sedans that are pre-LCI).

This model is not just a replacement for your old light but possibly a significant improvement. The GemPro light is two to three times brighter than the typical OEM LED license plate light options. It was designed for E46 four-door Sedan and five-door Touring models 323i, 328i, 325i, 330i, and 330xi.

All three mentioned license plate light models feature a simple plug-and-play type of installation. It can be done at home in a few minutes with just basic tools.

Here’s how to replace the license plate lights in your BMW E46:

Make sure to use a plastic trim remover to avoid unnecessary scratches and dents on your vehicle’s paint.

In addition to vehicle compatibility, there are a few other things to remember when choosing an LED license plate light for your BMW E46. Some of these include the color temperature, the power consumption, and the CAN-bus error.

Color temperature is typically represented in Kelvins (K) and refers to the range between warmer and cooler colors. Warmer colors have lower Kelvin indexes, while higher Kelvin indexes indicate cooler colors. At around 2700K, we have an Extra Warm White color. At 3000K, it’s Warm White. Standard White is around 3500K. Cool White is approximately 4000K, while the Daylight White (the brightest) is between 6000K and 6500K

Typically, the original license plate lighting color for BMW E46 vehicles is around 4000K, which is considered Cool White. This is fairly bright. All three mentioned license plate light products are in the range known as Daylight White (6000K to 6500K). Brightness should be a consideration, as it ensures a clearer view of the actual license plate, more on-road safety, and a modern look for your vehicle.

Typically, LED license plate light upgrades draw less power than factory bulbs. In the case of the three products mentioned above, we’re talking about 3W. Not only is this better for the environment and your car battery, but it also means the aftermarket lights offer better bulb longevity.

A significant problem with most aftermarket upgrades for vehicles is that some LED bulbs might end up throwing codes, as your ECU may think that there is no bulb installed or that there is an electrical malfunction.

All of the above LED license plate light replacement options have built-in CAN-bus controllers, which help enhance the digital compatibility between them and the E46 model.

Replacing your E46 license plate lights with LEDs is an easy task that can make your BMW have a more modern look due to the bright, white, and clear light output of modern LED bulbs. There is no point in replacing a defective bulb with an incandescent bulb, as LED offers much greater durability.