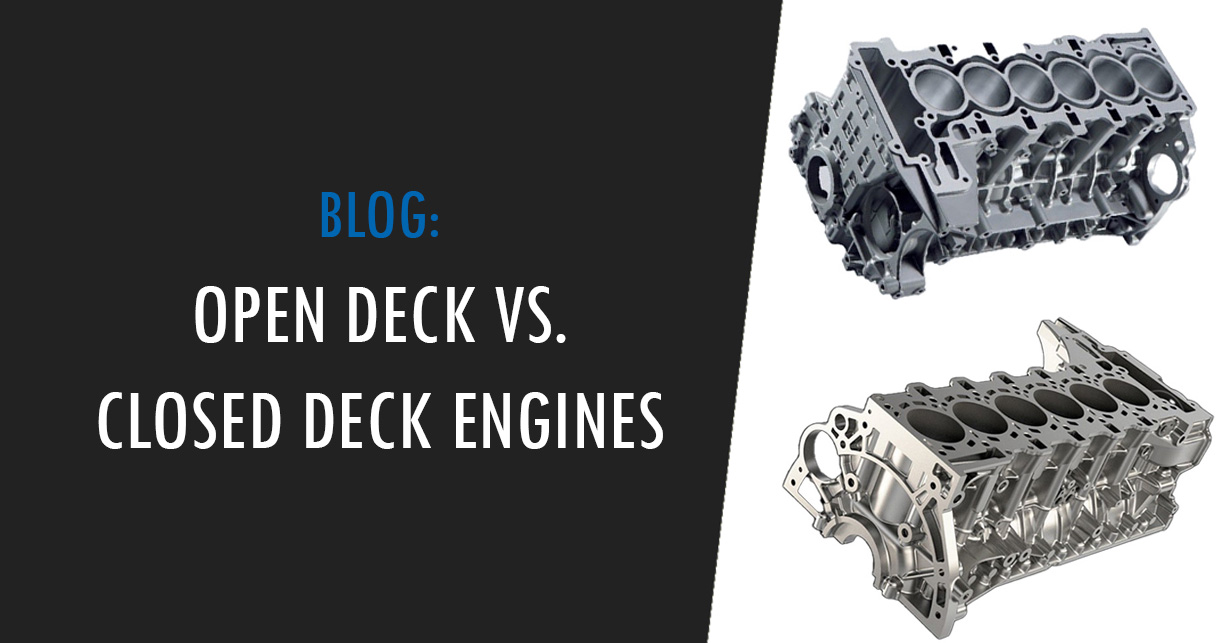 The engine is the beating heart of a car. It is the key component that transforms air, fuel, and spark into usable power. Not all engines are designed and built the same way.

One of the most important design differences is the design of the deck, situated at the top of the engine block where it meets the cylinder head cover. Open-deck and closed-deck refer to the design of the aforementioned deck. How do these two types of engines differ?

In this article, we are going to compare open deck vs. closed deck engines and tell you what are the fundamental differences between the two, and how they compare against each other. So, if you are interested in a short yet sweet automotive engineering lesson, you’ve come to the right place!

Open Deck vs. Closed Deck Engines: How do they differ?

The main difference between these two engine designs is that an open deck engine offers more space between the engine block walls and the cylinders. Through these openings, more coolant can flow which improves engine cooling. On the other hand, a closed deck engine is more rigid and thus is stronger and can withstand more abuse.

However, modern-day advancements in engine design have come to a level at which an open-deck engine isn’t far behind a closed-deck engine regarding structural rigidity. A closed-deck design is more expensive and is typically associated with high-horsepower performance cars which need to endure extreme cylinder pressures for extended periods of time, something you’d often find in racing.

In the world of automotive manufacturing, an open-deck engine is ideal as it requires less raw materials and is easier to produce. Development costs are also generally lower which means less research and development expenditure for a company.

Inherently, open-deck engine design is dominant these days as it brings down production costs through fewer development expenses and saving on material costs.

An open deck engine can perfectly function with a coolant system that would be insufficient for a closed deck engine.

The differences in weight are marginal between both of these engines design. An open-deck engine will generally have less iron or aluminum which in turn means a lighter block. The difference is small; for example, the open deck N55 weighs around ~30 pounds less than the closed-deck B58.

However, racing enthusiasts with a focus on weight reduction and a lower center of gravity are sure to greet weight loss with arms wide open, especially as the engine tends to be one of the heaviest, if not the heaviest part of the entire car.

With added reinforcement between the cylinder walls and the cylinder block, the sheer amount of metal keeps the engine structurally solid for a longer time. This also means a higher cylinder wall strength which goes hand-in-hand with the reliability of high horsepower setups. Closed-deck engines should be able to outlast a comparable open-deck engine quite easily.

3. Better for the track and high-demanding scenarios

A closed-deck engine is perfect for built racing engines that endure high levels of stress all the time. This is why most performance engines are indeed closed-deck engines. This design is able to withstand prolonged heat and continued high strain better, even though it does not manage to cool the engine as well as an open-deck design.

If you simply can’t make up your mind about which of these two engine designs you like more, you should also note that semi-open engine designs also exist and are intended to be the middle ground between open and closed deck engines.

A semi-open deck keeps the large openings as in the open-deck design but adds additional support (bridges) in a few spots throughout the openings.

This gives a semi-open-deck engine a higher maximum PSI capability which means that it can endure pressure better than an open-deck engine. However, it does not maintain the open-deck cooling efficiency as it is also somewhere in the middle in this regard. Semi-open deck engines are widely used by Subaru and other manufacturers.

If we were to compare two exact engines the only difference being that one is open-deck and the other is closed-deck, yes, an open-deck engine is comparably weaker. However, employing a closed-deck design is one of many different ways how you can make an engine more durable.

With today’s advancements in materials, precision machining, and overall manufacturing, some open-deck engines like the BMW N54 are really strong. The same story goes for most turbocharged open-deck engines.

If you want an excellent performance engine capable of receiving continuous abuse, yes, a closed-deck design is better. Closed deck engines can be more easily tuned and usually withstand higher power and boost pressures.  From stock, a closed-deck engine has a much higher power/pressure ceiling compared to an open-deck engine.

Can you make an open-deck engine closed-deck?

Coolant flows must be rerouted, and there are many additional considerations such as heat expansion, the melting point of the filler material, etc.

The best thing you can do is use a CNC machine to precision cut the area around the cylinders and install a precision cut plug/insert. This is typically finished by further deck processing which involves machining components such as the coolant ports onto the deck and decking the mating surface, the bore, and the hone.

Automotive engineers have almost perfected the internal combustion engine. There are design differences that offer advantages and disadvantages.

Closed deck engines are stronger and can withstand the added boost of an aggressive tune much better. That said, open deck engines with forged internals such as the N54 can also have extraordinarily robust internals. You shouldn’t discard them for your next build solely due to engine deck design.