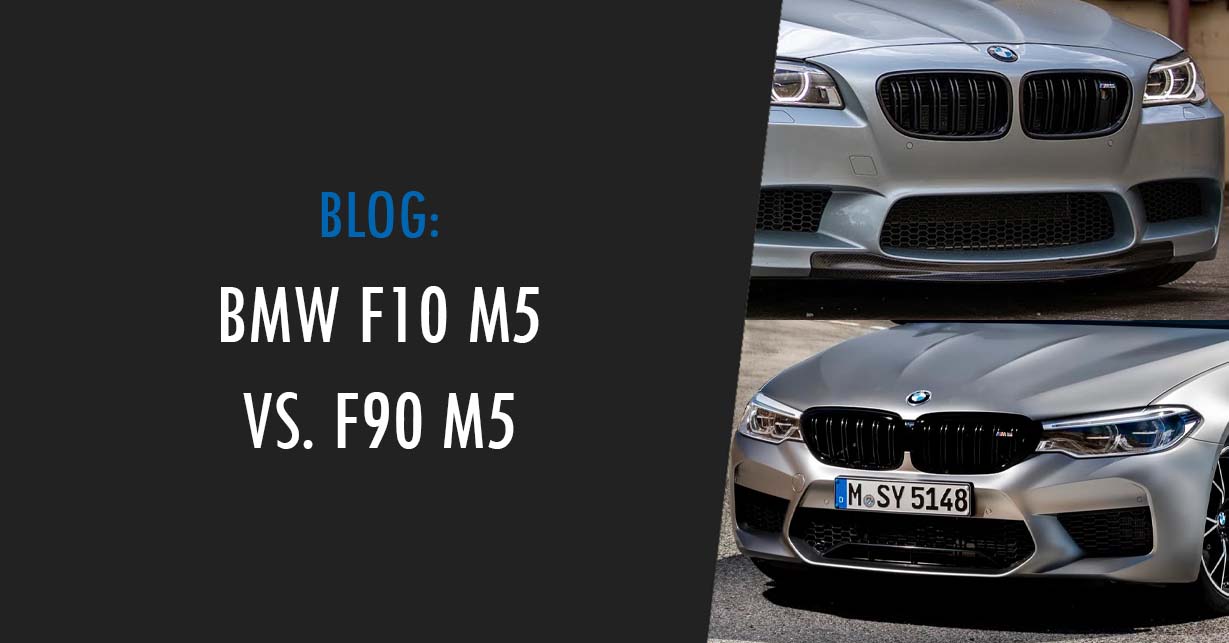 Introduced in 2011, the F10 M5 was BMWs first turbocharged M5 model. Featuring a twin-turbo 4.4L V8, it departed from the previous M5s with naturally-aspirated engines. The S63 engine combined with two excellent transmissions and refined but aggressive looks made the F10 a worthy successor to the E60 M5.

The F90 M5 is the successor to the F10 M5 and was introduced in 2017. On paper, it is powered by the same S63 engine; but this is a highly revised version with higher peak power and torque, a wider powerband, and with reliability improvements.

These two M5s seem like really similar cars, both are high-performance full-size sedans powered by twin-turbo V8s. However, there are some crucial differences in terms of transmission options and drivetrain. How does the F10 M5 compare to the newer F90 M5 in terms of power, performance, handling, driving feel, and reliability?

While both the F10 M5 and the F90 M5 are powered by the same S63 engine, the F90 M5 is powered by a newer iteration of the S63 4.4 liter twin-turbocharged V8, with a few differences and higher peak power and torque.

The F10 M5 features the S63B44T1, one of the earliest models of the S63 engine, and was the first BMW M5 equipped with a turbocharged V8. From the factory it has 553 horsepower and 501 lb-ft of torque, making it the most powerful BMW ever at the time. The F10 M5 Competition package was introduced in 2014, and it increased peak engine power to 567 hp.

The newer F90 M5 is powered by the S63B44T3, a revised version of the engine of the previous M5. Its power output is rated at 591 hp and 553 lb-ft of torque. The F90 M5 Competition was introduced in 2018 and increases peak horsepower to 617 hp while torque remains the same.

BMW significantly improved the S63 between these two M5 models, increasing both horsepower, torque, and power delivery. The F90 M5 is more powerful than the F10 M5.

The F10 M5 can be had with a manual or a DCT transmission; the F90 M5 is only offered with an automatic

On the other hand, the F90 M5 has an 8-speed ZF 8HP automatic transmission. While not as exotic as a DCT, it will most likely function better in reality. Shifts are almost as quick as the outgoing DCT, but smoother, with fewer jerks at low speeds and easier to adjust to. It also offers a reduction in RPM at highway speeds which means reduced fuel consumption. The ZF HP8 is an impressive transmission.

Transmission options-wise, the F10 M5 is the clear winner, as you can choose between a high-performing DCT or a traditional 6-speed manual for complete control.

The newer F90 M5, on the other hand, is a significant deviation for BMW M, since it is the company’s first non-SUV model to feature all-wheel drive. Its AWD powertrain has some M character, allowing it to entirely shift over to RWD and stay in that mode until it is manually switched back, this makes it an excellent choice for those that still prefer rear wheel drive.

The older BMW F10 M5 has a more raw driving feel than its successor mostly due to the hydraulic steering system, a remnant of old-school BMWs. On the other hand the newer F90 M5 has a more refined driving feel, and is more subdued in terms of the road feedback it can transmit to the driver. Also, the steering wheel road feel is greatly reduced due to the switch to electric steering.

For those coming from older BMWs, the F90 M5 might feel numb and a bit disconnected from the driver. The capabilities of the suspension and drivetrain are not well announced to the driver as BMW seemed to prioritize driver and passenger comfort over a connected driving experience.

The BMW F10 M5 is the clear winner regarding driving feel. However, both of these M5s won’t be as engaging as other smaller M cars, such as the M3.

In terms of tuning and modifications, the BMW F10 M5 and F90 M5 are similar since they share essentially the same engine. The F90 responds better to the same mods due to slight engine improvements as it is powered by an updated S63 engine.

A catless downpipe, upgraded chargepipe and a tune alone bring considerable power gains, with the F90 reaching around ~800 wheel horsepower with those two simple mods alone. Other mods include upgraded intake, fuel injectors, spark plugs, and ignition coils. If you want to exploit all the potential of the S63, upgraded turbos can take the F10 M5 and the F90 M5 to the 1000-horsepower territory.

Both are excellent tuning platforms, but the F90 M5 can gain more power from the same mods

The AWD powertrain and the updated 8-speed ZF automatic gearbox make the F90 far more likely to be able to put all the power down. The RWD-only F10 M5 might struggle to put the power of a modded S63 to the ground at low speeds.

Overall, these are excellent tuner platforms that respond well to simple mods, and upgraded turbos can take the performance of these machines on par with modded supercars.

Styling and exterior looks are very subjective, but most can agree that any BMW M5 strikes an excellent balance between an elegant German saloon and a high-performing sports car.

The striking and assertive appearance is among the initial features you observe as you approach the redesigned F90 M5. The pre-LCI F90 M5 looked very similar to the outgoing F10, as the design of the headlights and tail lights pretty much remained the same.

With the LCI facelift, the F90 M5 is arguably the best-looking modern BMW, as it incorporates the new BMW design philosophy but also retains the small kidney grilles.

A BMW M5 isn’t known for its high reliability and low running costs. After all, this is a four-door sedan that can put supercars to shame on a straight line. With a newer iteration of the S63 engine, the F90 M5 should be more reliable than the F10 M5 which featured the first twin-turbo V8 on an M5.

Common issues for both vehicles include but are not limited to: failing spark plugs and ignition coils, VANOS issues, excessive oil consumption, failed turbochargers, and excessive rod bearing wear. The early S63B44T1 used in the F10 M5 was notorious for being a very high-maintenance engine with a short life expectancy.

The updated S63 in the F90 M5 should be more reliable

With many of the S63 engine issues corrected, the S63B44T3 in the F90 M5 should be more reliable in the long run due to stronger internals, updated ignition coils, and improved engine design in general.

If you’re looking for the best possible reliability with a high-performing BMW engine, we recommend you opt for a turbocharged straight six instead, such as the S58 or B58.

With early models being over a decade old now, the F10 M5 is a great value provided you can get your hands on a well-maintained model or are ready to take care of maintenance items with a trusted BMW mechanic. Unfortunately, doing maintenance yourself on the F10 M5 is difficult unless you already have experience doing so with other similar high-performance German sedans. A used F10 M5 can be had for $25,000 or less.

The F90 M5, on the other hand, is not inexpensive. Fantastic performance, luxurious interior, and modern technology come at a great cost. The F90 M5 goes for more than $90,000, and a well-optioned F90 M5 Competition can cost upwards of $130,000. But while it’s not an economical car, it is priced comparably to its rivals; the Audi RS6 and the Mercedes E63 AMG are the obvious competitors, both of which are priced similarly. An early second-hand can be had for $65,000 or less.