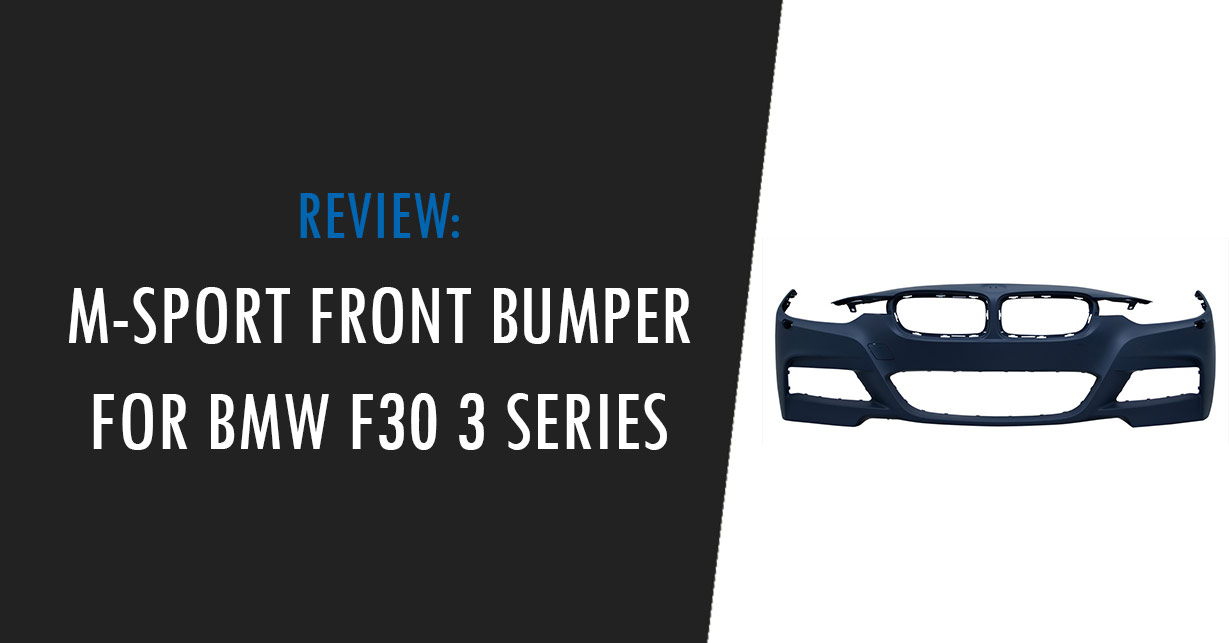 Without the famous BMW F30 M-Sport Front Bumper, the world of luxury cars wouldn’t be the same. However, although the stock bumper looks great, you’ll see many BMW owners go with an aftermarket upgrade here to give their car a personal touch.

If you want your BMW F30 to look even sportier than it currently does, a front bumper aftermarket upgrade can push it in the right direction.

In this entry, we outline three brilliant front bumper upgrades for your F30, offer a short discussion of compatibility and installation guides, and give you a list of frequently asked questions.

This is a polypropylene primered black bumper built for F30 BMW models. The package contains the bumper, a lip spoiler, and fog lights. It also contains the hardware necessary for bolt-on installation, if self-installation is desired. The bulbs will also have to be put in the fog lights and the BMW logo will need to be affixed to the bumper.

Unlike most other bumpers, this one comes with an aero front bumper lip, which will give the F30 a much sportier look than most other aftermarket bumpers.

Note that the bumper doesn’t come with park distance control (PDC) holes and an installation manual isn’t included either. If you have experience with BMW vehicle tune-ups, you can try installing the bumper yourself, but taking the car to a professional is recommended.

This package contains an M3-style front bumper set and a lip spoiler. It doesn’t come with an instruction manual, and there aren’t any pre-drilled PDC holes. The hardware for direct bolt-on installation is included, but it’s still recommended that you take the vehicle to a professional and have it properly installed.

Also, don’t throw away the old bumper before you remove the BMW emblem from it. In fact, it’s recommended that you keep the entire original bumper somewhere, to be safe. But if the plans are to remove the BMW emblem, reaffix it with a proper adherent to make sure that sticks to the new bumper.

This model is a primed black polypropylene front bumper that looks much more aggressive than your regular aftermarket bumpers.

Inside the package, there’s an M3-style front bumper, hardware for installation, and an aero lip. In addition, it also includes the necessary hardware for direct bolt-on installation. Take note that the fog lights also aren’t included in the package.

An installation manual is not included, so you should probably leave installing it to the professionals. But a seasoned BMW aficionado who has some automotive skills might be able to install the bumper on their own.

Anyone with a 2012-2018 BMW 3 Series F30/F31 without parking sensors will find these three bumpers will fit their car perfectly. They’re compatible with both the pre-LCI and the post 2015 LCI Models

All three bumpers mentioned above can be installed at home, as long as the instructions are followed carefully. However, a misstep can easily lead to scratches, dents, and more serious damage to a vehicle’s body. So, those without a lot of experience with aftermarket installation should take their vehicle to a reputable detailer and have the new bumper installed there.

For BMW owners willing to take matters into their own hands and install that front bumper by themselves, here’s a quick tutorial on how to do it. Step-by-step procedure below:

The screws that hold the license plate in place often also secure the foam crash bar underneath the front bumper. If there’s more than one license plate, make sure to remove every single one – these shouldn’t stand in the way, and they are easily removable (it only takes a screwdriver).

Remove all the screws holding the bumper. There are six T-30 screws across the top and a T-25 screw over each headlight. Start removing them using the appropriate tools from the topside part of the car.

At the bottom, there are eight 8mm screws underneath the bumper’s bottom side. Make sure to remove these, as well. The process also requires releasing some pushpins, as well.

4. Disconnect the Fog Lights (And Other Connections)

If the BMW has fog lights, unplug them before removing the bumper to avoid damaging the wiring or another part of the car. Fortunately, the fog lights are very easy to unplug – press on either side of each fog light plug and remove it.

Depending on the car’s model, it may have some other connections. Make sure to remove them before removing the bumper.

Gently slide the top of the bumper and carefully pull the bumper off. Then, remove fog lights off the bumper (held in place by two screws).

Start by reattaching the fog lights to the new bumper. Then repeat the entire removal process in reverse until the new aftermarket bumper is fully installed. There should be no hitches here, as the three mentioned models work the same as the factory default.

PDC stands for Park Distance Control. It is BMW’s name for distance sensors on the front and the back that can assist you with parking and maneuvering in tight spaces.

Although aftermarket front bumper upgrades that fit vehicles with parking sensors are available on the market, the three models listed here do not. They will work only if the BMW F30 M-Sport is a model without parking sensors.

2. Would the M-Sport Bumper Need to Be Painted?

By default, all three mentioned models come in primed matte black and are made out of polypropylene like the following:

If your BMW F30 M-Sport is black and the shade fits the bumper’s color and texture perfectly, painting is unnecessary. Even if the car’s color isn’t black, a black bumper might work. However, a reputable car shop should be able to match the bumper to the color of the car’s body.

3. Do These Bumper Covers Include the Front Lip?

Yes, all three listed models include the front lip. However, the last one on the list includes the aero lip, which brings a more aggressive appearance to the table.

An aftermarket bumper will give your BMW F30 M-Sport vehicle a sportier, more aggressive look. Each of the three listed models looks different, but they are all installed in pretty much the same way. Those familiar with auto repairs and upgrades and have aftermarket installation experience should be careful when trying to install the new bumper on their own. If you’re new to the world of aftermarket upgrades, it might be better to visit a car maintenance professional to avoid damaging your favorite vehicle.